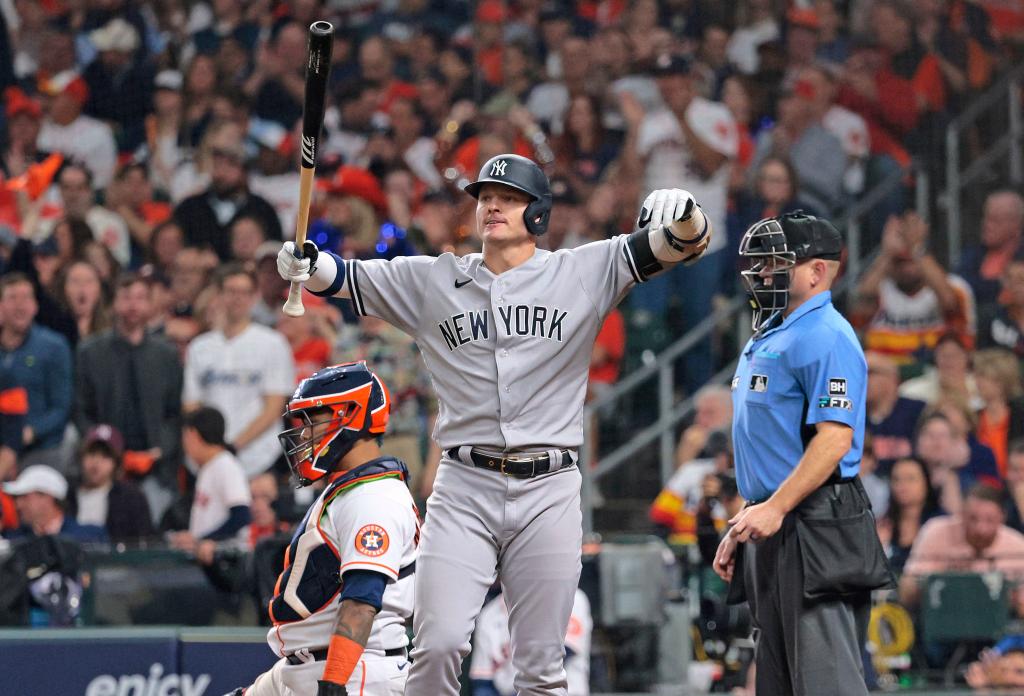 HOUSTON — This was the steal game.

The Astros rolled out one substantial advantage from lots of rest to home field to having the likely AL Cy Young winner in Justin Verlander making his 32nd postseason start against Jameson Taillon — a No. 4 starter making his playoff starting debut.

And as lopsided as it all sounds, the Yankees had a chance to steal this game and all the positive implications that would have gone along with taking the opener of this AL Championship Series. But that didn’t happen.

Because after asking so much of his main relievers to win a Division Series in five games over Cleveland, Aaron Boone decided to holster them and live with the consequences. He needed Clarke Schmidt and Frankie Montas to come up big. They did not.

And the Yankees lost because an offense that over the first three innings built Verlander’s pitch count and put runners in scoring position, could never deliver a meaningful hit beyond a solo homer from Babe Bader. Sitting at Nos. 5-6 in the order Josh Donaldson and Matt Carpenter were particularly destructive, striking out in seven of their eight plate appearances.

Of course, Boone wanted to win Game 1, steal home-field advantage, and deliver a quick strike that this could be different from 2015, ’17 and ’19 when Houston ousted the Yankees from the playoffs. But he also treated this as a tryout camp.

Boone seemed to be trying to assess what he has for this best-of-seven and the answer might be not enough after the Astros took the opener 4-2.

Every team has injuries. No club is allowed to cry about them. Sympathy for the powerhouse Yankees is going to be dimmest of all. But who is not here for the Yankees is stark against this particular opponent, which is deeper anyway and had played just three times in 13 days coming in to face the Yankees, who had to fly to Houston after eliminating the Guardians on Tuesday evening.

The professional bats of Andrew Benintendi and DJ LeMahieu never made it back and that forced the Yankees to stick with Donaldson and audition Carpenter; and also to rely on homers more than ever. Ron Marinaccio (shin) also did not heal enough to widen Boone’s relief circle of trust. So he keeps turning to Schmidt with bad results.

Neither Verlander nor Taillon were sharp initially. But Verlander is Verlander, a Hall of Famer still flourishing at 39. He found pitches when he needed. A two-out hit by pitch and error put two on for Donaldson in the first. Strikeout. In the second, Harrison Bader became the first Yankee ever to homer four times in his first six postseason games.

An Anthony Rizzo walk and Stanton double put runners on second and third with one out in the third. Donaldson and Carpenter fanned. That initiated a period in which Verlander struck out six straight Yankees. He never allowed another base runner in six innings with 11 strikeouts.

The next Yankees hit was a Rizzo homer with two out in the eighth that drew them within 4-2. Stanton rocketed a single. Donaldson walked as the tying run. Carpenter was up with a chance to make a bad night disappear. To actually help the Yankees steal it. He was the go-ahead run but for the sixth time in six playoff at-bats since he returned from a broken foot, Carpenter struck out.

Strike outs and homers. The Yankees whiffed 17 times. They hit two solo homers. Eighteen of their 22 playoff runs are via homers. But Houston hit three homers and 13 of their 17 runs are from long balls. But the Astros don’t whiff. They had just two, none before Jose Altuve in the sixth.

Taillon couldn’t miss bats and Houston made excellent contact. But he survived, helped by a brilliant diving play in right from Judge and a really good one in left from Stanton. Schmidt came on with one on and out in the fifth, loaded the bases and then induced a Kyle Tucker double play that kept the score 1-1. Yuli Gurriel and Chas McCormick — hardly the might of the order — went deep off Schmidt in the next inning. Jeremy Pena did so off Montas in the eighth.

The Yankees could not return enough fire. The hope Boone has now is his three best starters — Luis Severino, Gerrit Cole and Nestor Cortes — will start the next three games (the latter two in New York) on full rest and now with the best of the bullpen having at least gotten this one game off.

But this one was there to be stolen going into Games 2-3-4. There was a chance to suggest this time against the Astros was going to be different. That didn’t happen in Game 1. What was stolen was a chance to make a statement.