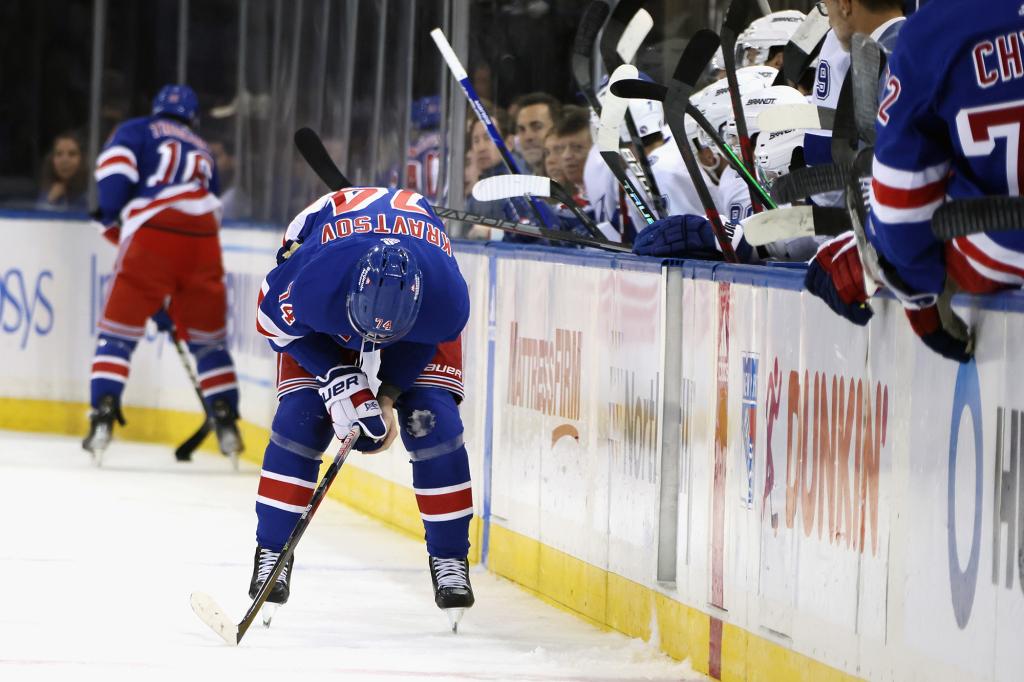 This was a very good night for the Rangers, who constructed a 60-minute command(ing) performance Tuesday in their 3-1 victory over the Lightning in the 2022-23 season opener at the Garden.

Mika Zibanejad was splendid, Igor Shesterkin was as sharp as ever, Kaapo Kakko looked like he belonged playing up top, the new guys fit in well, and the club held more than its own on five-on-five, while excelling on their specialty units.

But (and you had to know this was coming), it took just 7:01 to illustrate just how tenuous the Blueshirts’ salary cap situation is and the kind of a tightrope they will have to tiptoe across in order to reach the trade deadline with enough capital to make a difference.

For it was at 7:01 of the first period that Vitali Kravtsov left the ice, the bench and the game for good with an upper-body injury after he crumpled along the offensive right-wing boards after taking a hit from Tampa Bay’s Victor Hedman.

Alexis Lafreniere flipped from the left wing on the third line to the right wing on the second line, with Artemi Panarin and Vincent Trocheck. The line crackled. Filip Chytil played with a revolving cast of wingers on his unit, while head coach Gerard Gallant massaged his bottom six — well, five — without issue throughout the match.

But the issue lies in how Kravtsov’s absence (day-to-day, what else?) will affect the cap, not necessarily the lineup. Because the Rangers will be destroyed if they’re hit by multiple injuries at the same time. Depth is questionable enough not only on the team, but also through the organization. More so, there is simply not enough space to handle a rash of absences.

Here’s the deal. In keeping two extra forwards and a 23-man roster as a consequence of the upper-body injury Sammy Blais sustained Saturday in an exhibition game against the Islanders, which sidelined the winger for this one, the Blueshirts entered the season with approximately $183,500.

Because space accrues, it was going to be imperative for the club to cut down to one extra forward as soon as possible. Every dollar the Rangers are unable to save means approximately $4.65 the team won’t have to spend at the deadline.

But cutting down may not be possible if Kravtsov is out for any length of time. If he’s out for the back-to-back Thursday and Friday at Minnesota and Winnipeg, respectively, then Dryden Hunt, who had seemed destined for waivers, would have to step in. If Blais is ready, the Rangers then would have one healthy spare.

Even if Kravtsov, who played three shifts for a total of 1:38, is placed on injured reserve, the Blueshirts would not have the space to accommodate, say, a recall of Julien Gauthier. It’s going to be a minefield out there for the Rangers.

That, of course, is going to land on general manager’s Chris Drury’s plate. There is only so much he can do. There is no fat to trim on the roster. The Rangers not only will have to be good, but also will have to be as lucky as they were last season, when Zibanejad, Chris Kreider, Jacob Trouba and K’Andre Miller did not miss a single game because of injury or illness, while Lafreniere missed two, Goodrow missed three and Adam Fox and Ryan Lindgren missed four apiece.

That is just the reality. But the Blueshirts’ effort Tuesday was equally genuine. Kakko’s presence and work along the walls and in tight spaces helped the Kreider-Zibanejad connection to play down low, one of the objectives laid out by both No. 93 and No. 20.

“We had too much one-and-done on rush chances,” Kreider said. “We want to tilt the ice and be a riding team where we’re controlling shifts and tiring out opponents in their own end from one shift to the next and one line to the next. We want to be more consistent in that.”

That mission was accomplished in this one. The Blueshirts, by the eye test at least, had the better of it below the hash marks. And there was also a power-play goal and a shorthanded goal from Zibanejad, who shot out of the gate by pouring nine shots (on 12 attempts) on Andrei Vasilevskiy.

“We want to have the puck more and create more second chances,” Zibanejad said at the end of camp. “But when you talk about five-on-five and what we can do better, special teams are called that for a reason. We want to be at the top at both [the power play and the penalty kill].

“If the game is 3-2, I don’t care where the goals come from as long as we have the three. They all count the same.”

Indeed, there was a power-play goal and shorthanded goal from Zibanejad and a five-on-five goal from Goodrow. One plus one plus one equaled 3-1.

It will be a season-long challenge for Drury to make the math work that well.