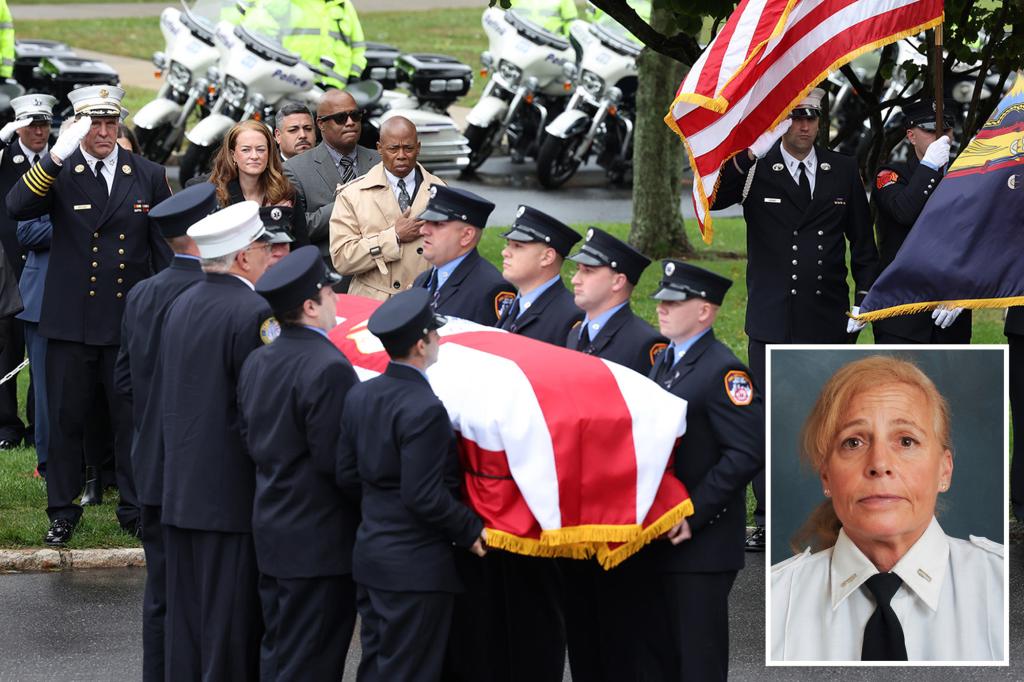 
The veteran FDNY paramedic who was fatally stabbed in Queens was posthumously promoted to captain at her emotional funeral service on Wednesday — as her father ripped the man responsible for murdering his “beautiful girl.”

“That man murdered my daughter and she would be the first one to come to his aid if he ever needed help,” Lt. Alison Russo-Elling’s father Frank Fuoco said during an unplanned speech at the service.

“He left her lying there on the street like a rag doll that was just discarded,” Fuoco said, referencing shocking surveillance footage of the Sept. 29 attack that he stumbled across on Facebook.

“She laid there motionless on the ground as he assaulted away,” the grieving dad continued. “I couldn’t hear her cry out, ‘Mom! Dad! Help!’ No. Only God knows the horrific look on her face as he stabbed her to death.

She was such a beautiful person,” Fuoco said of his daughter. “He killed her and tore a hole in our hearts and all her colleagues.”

Thousands of first responders gathered in the rain outside of the Tiles Center at LIU Post in Brookville to attend the service and salute Russo’s coffin, which was driven in an FDNY ambulance with her name emblazoned on the doors.

As FDNY paramedics carried her coffin, draped in a red and white paramedic flag, the department’s bagpipes played Greensleeves while Mayor Eric Adams and acting FDNY Commissioner Laura Kavanagh stood in the mist with their hands on their hearts.

“We cannot bring her back but today the commissioner and I are promoting her to the rank of captain. We want people to know what a brave hero your mom, your daughter was,” Adams said during the service, addressing Russo-Elling’s family.

“My heart goes out to you. Not as the mayor, not as an elected official but as a son of the city and as a person, a human being. I’m so sorry.”

The funeral comes after the 61-year-old was stabbed 19 times around the corner from her EMS unit in Astoria on Thursday in what police called a senseless and unprovoked attack.

The then-lieutenant was on-duty at the time and was about six months away from retirement.

“There are countless people still walking this earth thanks to Alison and her dedication to her job. She took pride in her job and loved the people that she worked with and volunteered with,” Russo-Elling’s brother Craig Fuoco said.

“Although her job and volunteering took up a lot of her time, she always had time for family. She saw my parents regularly and helped them out tremendously. Alison was my parents’ strength and support. My heart breaks for them,” he continued as he fought back tears, his father’s hand on his shoulder urging him to continue.

“No parent should ever have to bury their child.”

and to not focus on the violence that left her dead.

“Any hate in your heart created from this sudden calamity, I need you to remove that. I need you to replace it with love. This is not a time to dwell on tragedy,” the daughter said.

“Do not let your thoughts be clouded by this act of sudden trauma. You need to replace it with honoring my mother for the hero that she was. Hero that she is.”

Kavanagh recalled Russo-Elling’s profound selflessness and said throughout her 25 years of service, she answered over 25,000 emergency calls.

“It may seem impossible now but EMS makes the impossible possible everyday on every call by literally giving someone a second chance at life,” Kavanagh, who at times appeared to hold back tears, said during the service.

“Captain Alison Russo defined FDNY EMS. She was caring, humble, whip smart and resilient. She made quick work of obstacles she faced and she was always up or a challenge. Captain Russo did not shy away from those challenges, she embraced them. She did not pause in the face of danger, she ran towards it.”

Russo-Elling is the second Big Apple paramedic to be murdered in the last five years after EMT Yadira Arroyo was run over by her own ambulance in 2017.

Chief of EMS Operations Lillian Bonsignore said their deaths serve as a reminder of the dangers her first responders face on the job every day.

“This moment in time, this horrible and senseless moment, thundered across our nation and across our world, knocking EMS and other first responder communities to their knees as this news spread. Incomprehensible and horrifying,” Bonsignore said.

“It is impossible and frankly unacceptable to say EMS work is not as dangerous as the other first responder work… We need the people in our city, in our state and in our country to choose us and stand up for those who risk their lives for you. We need you to care about us and we need your help. We cannot do this alone.”

She implored first responders to remember Russo-Elling’s spirit as they continue the service she devoted her life to.

“Let her words guide you. Let the sounds of our emergency response serve as a sign of our remembrance for Captain Alison Russo,” Bonsignore said.

“Our sirens will continue to sing a reminder to all: the best, just like Alison, are on their way.”