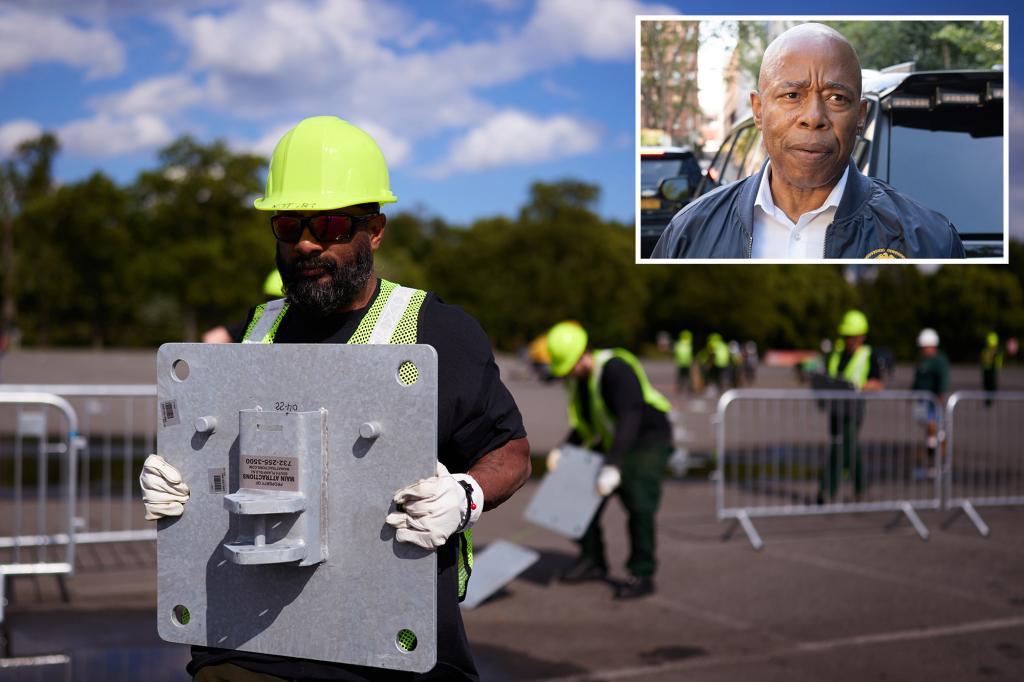 
The first of Mayor Eric Adams’ tent cities for migrants was under construction in The Bronx on Monday, with workers “getting stuff done” to lay out the welcome mat in the parking lot at Orchard Beach.

About 30 hardhats were drilling holes in the pavement and erecting poles and beams for what officials have said will be five massive, heated tents to house 1,000 adults for as many as four days each while they undergo screening before entering the city’s shelter system.

But while Orchard Beach has been called “the Riviera of New York City,” photos of the planned accommodations — rows of spartan, camp-style cots without mattresses — suggest staying there will be more like a visit to “Club Shed.”

The 1.1-mile strip of sand along Long Island Sound is nestled deep within Pelham Bay Park, which at nearly 3,000 acres is about triple the size of Manhattan’s iconic Central Park.

“Why send them to a low-income area?” fumed Rob Soto, 35, of Soundview.

“Why don’t they send them to the Hamptons? It’s elected people being petty and the people suffer.”

Retiree Nelson Cortes, 76, of Morris Park, said he used the park on a daily basis to escape the noise of the city and enjoy the fresh air.

“We don’t want this. We come here to enjoy the beach. We bring our families here to have a picnic,” he said.

“I don’t live far away from here and the value of my house will go down.”

Cortes also worried that the ongoing surge of migrants to the Big Apple, now estimated at 14,600 since May, meant that “there won’t be enough jobs and there will be more crime.”

“When I came to this country, I paid my own fare and I didn’t get anything from the government. I arrived, got a job and provided for my family.”

Another Puerto Rican native, Juan Nazario, 59, of City Island, said, “This is crazy.”

“Anything illegal that happens here now, the Puerto Ricans will all be blamed for it.”

Workers preparing the parking lot said they were employed by US Structures and based in Washington, DC, where they typically erect huge tents for concerts and White House events.

There were floodlights, more than 20 generators, portable toilets and a “mobile sleeping unit” on the site, where one worker said the job could take 10 days or more.