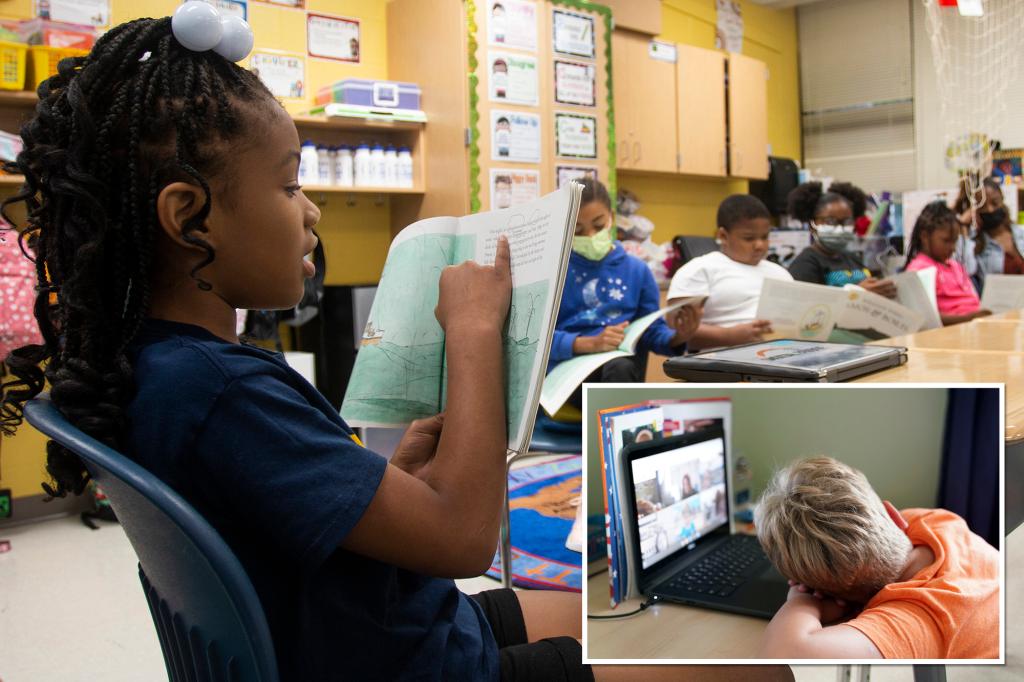 
Math scores for New York City students took a nosedive during the pandemic — with only 38% of kids in grades 3-8 being proficient in the subject last school year, according to results of statewide standardized tests released Wednesday.

That’s a dip of nearly 8 percentage points from 2019, before COVID-19 hit, when 46% of students made the grade, the highly-anticipated data put out by the city shows.

Meanwhile, kids in grades 3-5 — who were just learning how to read during the worst of pandemic-era school disruptions — saw a substantial drop in English scores, though results in that subject increased for those in 6th through 8th grade.

As a whole, less than half of 3rd through 8th graders were considered proficient in English last school year, the data shows.

The results offer a first look at how students in the nation’s largest public system are faring in the aftermath of school closures and the trauma induced by COVID-19.

“While results are complicated by the pandemic, the results reflect hard work by our students, families and educators during a difficult time,” said First Deputy Chancellor Dan Weisberg in a statement.

“They also reflect opportunity gaps and outcomes in particular for Black and Hispanic students as well as students with disabilities and English-language learners that are unacceptable,” he said.

Students with disabilities and English-language learners showed some improvements in reading, but their pass rate declined in math. Fewer than 2 in 5 schoolkids with a disability passed either test, despite there being alternative assessments for kids with the most severe needs. Just 13% of current English learners showed proficiency in reading, and 15% in math.

Weisberg added that his focus “looking ahead” is for all students to graduate on track for careers, economic security and “a positive force for change.”

Officials suggested remote learning may have had a bigger impact on math scores than reading.

English results for kids in 6th and 7th grade, specifically, saw a big improvement since the last time tests were widely administered in 2019.

But scores of the youngest test takers — 3rd and 4th graders — have plummeted following school closures. English proficiency for 3rd graders dropped by 4 percentage points, while those in 4th grade saw a dip of 6 percentage points from 2019.

“These students would have been in 1st and 2nd grades in March 2020” when classes went remote, explained Kim Sweet, executive director of Advocates for Children, “grades when children are mastering the relationships between sounds and letters, and building the foundational literacy skills that will shape their future academic trajectory.”

Research shows students who do not learn how to read by 3rd grade will struggle to master the basic skill later on.

Sweet added she was “encouraged” the current administration under Mayor Eric Adams has prioritized literacy, but warned of challenges ahead.

“Shifting what happens in thousands of classrooms on a day-to-day basis is no small task,” she said, “and the devil is truly in the details.”

The last time that a majority of students sat for the state tests, in 2019, more than half of city schoolkids still couldn’t handle basic math or English, even while scores ticked up slightly. Only 47.4% in grades 3-8 passed the English language arts exams, and 45.6% the math. The English proficiency rate improved 0.7% from the year before and math scores went up by 2.9%.

Roughly 80% of local kids did not take the state exams in the 2020-21 school year, when students who were mostly learning remotely had to opt into the tests.

Last school year, more than 10% of all public school kids opted out of one or both tests, compared to 4% in 2019. Though in-person learning had resumed full time, roughly 40% of city students were regularly absent from school.

“Chronic absenteeism, which is not obvious in the scores, is a hidden dimension,” said David Bloomfield, a professor of education law and policy at Brooklyn College and the CUNY Graduate Center.“Those kids are disproportionately represented in that 10% who didn’t even take the test.”

Bloomfield suggested there could be challenges to interpreting the city data without having the results for the state as a whole, especially when it comes to the disparity in reading scores by grade.

“When you see what looks like a pretty clear division between the lower grades and higher grades, it may be an artifact of the test. We won’t know until we see statewide test scores come out — to see whether there’s been an overall pattern, or if this is unique to New York City,” he said.

Statewide results are usually released in August or September, but have been delayed for weeks this year over what the Education Department said was changes to how it compiles the data.

Education officials last week said they were allowing individual districts to publish the results if they so choose. Meanwhile, statewide data remains under embargo as education officials say they are finalizing the metrics and accounting for privacy considerations.

“As soon as statewide assessment data is available this fall, the Department will release it,” said spokesperson Emily DeSantis.

Federal data released earlier this month — dubbed “the nation’s report card” — showed similarly dizzying drops, especially in math scores, which declined for the first time since the test began half a century ago.

Together, advocates say the results are not only a barometer of how students performed, but also how New York City can spend more than $4 billion in federal stimulus to recover from the pandemic.

“This data must be used to inform and adjust spending and strategies to address pandemic related unfinished learning,” she said.