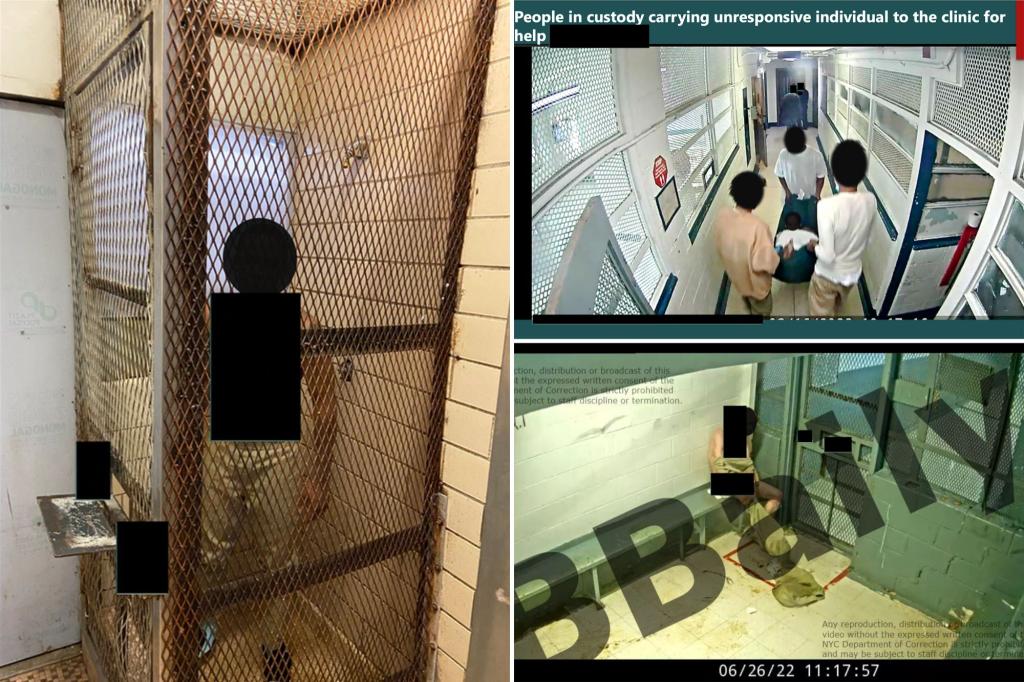 
Newly obtained images from inside Rikers Island have shed more light on the deplorable conditions inside the troubled jail system.

The photos, presented to Manhattan prosecutors by the Board of Correction last month, give a glimpse into the hellish realities faced by inmates on Rikers amid an agency-wide staffing crisis.

One series of stomach-turning pictures inside the jail depict an inmate sitting in his own feces for about 11 hours at an intake center until another prisoner gives him a fresh set of clothes, according to the presentation shown to hundreds of prosecutors in District Attorney Alvin Bragg’s office.

Another series of disturbing images show a man trapped in a decontamination shower for about 24 hours before he was later removed on a gurney due to self-harm, the presentation revealed.

The presentation was seen by around 200 to 300 prosecutors. The images were first reported by Gothamist and later obtained by The Post.

Other images even show several inmates — not staff — carrying unresponsive detainees either down stairs or across hallways in a bid to get them urgent help. A video shown to the prosecutors details inmates providing first-aid to a suspected overdose victim with the use of Narcan that saved his life.

The latest explosive revelations is another chapter in a long and frustrating history of poor conditions inside Rikers. Since the start of 2022, 16 inmates have died in custody or while discharged on compassionate release.

The district attorney’s office reached out to the Board of Correction, which oversees compliance inside city jails, to be part of the panel on jail conditions that was moderated by Bragg, according to an office spokesperson. Rookie attorneys are also headed to Rikers over the next several days to tour the facility in-person, the office said.

A source told The Post this was the first of its kind presentation, though past Manhattan district attorneys had prosecutors tour the facilities.

The DA’s office said in addition to the presentation, speakers for the panel included two former inmates, including one who told The Post many of the comments from assistant district attorneys were “wow and “oh my God.”

“I think they never really had seen the images the BOC provided and it confirmed a lot of things they heard the first time — they’ve seen the suffering and the pain and the mismanagement of the jail system,” said Mr. Five Mualimm-Ak, who is the president of the Incarcerated Nation Network and a former Rikers detainee.

Another presentation is expected to be given in the near future, according to a source.

Department of Correction Commissioner Louis Molina said in a statement the horrifying images “represent points in time” and insisted those conditions viewed on the presentation were not continuous on Rikers.

“Our infrastructure and staffing challenges, which are the result of years of mismanagement and neglect, are no secret,” Molina said in a statement. “Every day we are pursuing our Action Plan in partnership with the Federal Monitor to permanently eradicate the very conditions seen in some of these photos.

Public Defender Eliza Orlins decried the conditions and blasted Bragg for continuing to send people to Rikers “to potentially die in these horrific conditions.”

“DA Bragg and his ADAs can feign shock and ignorance but public defenders have been telling them about the conditions at Rikers for months on end,” she told The Post.

“These meetings mean nothing if there’s no action accompanying them,” Orlins added. “The Manhattan DA has sent close to one-third of the people who are languishing at Rikers there. It is entirely unacceptable. The suffering, torture, and blood is on his hands.”