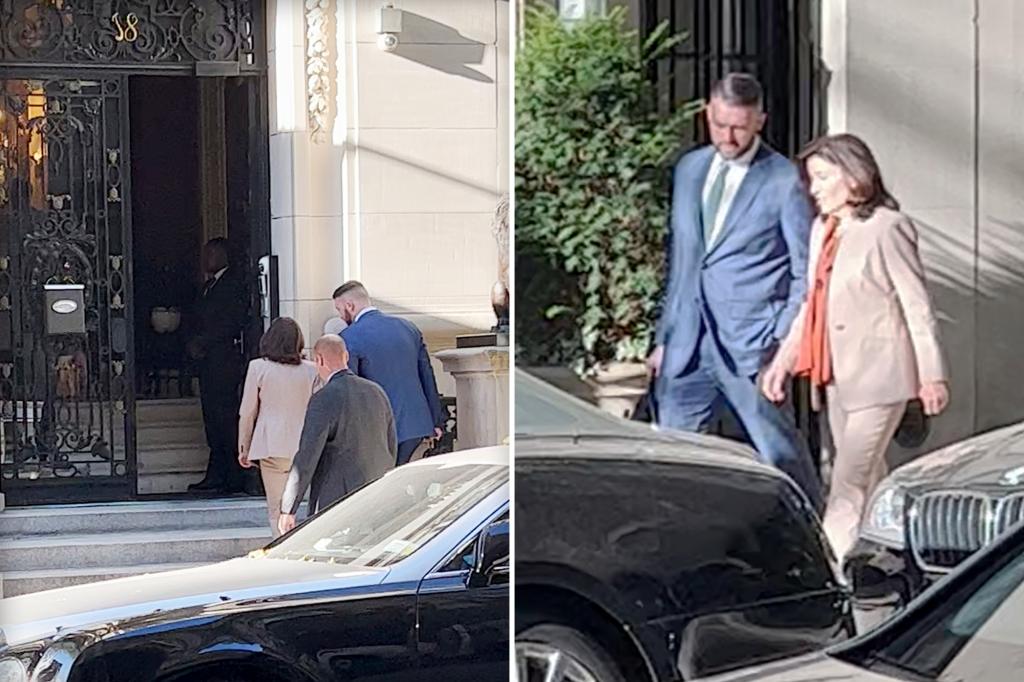 
Gov. Kathy Hochul attended a secret meeting this week at the Upper East Side townhouse of Alexander Rovt — a billionaire mega-donor to her campaign whose hospital network was bailed out by the state in April.

A source provided The Post a video of Hochul — who is already under fire over accusations of pay to play campaign donations involving an overpriced, no-bid $637 million COVID test contract — entering Rovt’s mansion on East 68th Street Thursday morning.

Rovt, 70, is chairman of the board of One Brooklyn Health Systems Inc., which runs a network of medical facilities where the coronavirus reportedly ran wild during the first, deadly wave of the pandemic.

Its hospitals include the financially distressed Interfaith Medical Center, Kingsbrook and Brookdale.

The state budget — approved by Hochul and the legislature in April — pumped $1.7 billion into a network of “financially distressed” hospitals that include Rovt’s One Brooklyn system.

She is facing off against Long Island Rep. Lee Zeldin, the Republican candidate for governor, in a bid to remain New York’s chief executive after taking over when Andrew Cuomo resigned last year in a sexual harassment and misconduct scandal.

Rovt has also had ownership interests in the Optima Care Smithtown nursing home, and a home health care agency, Prime Health Choice, where he serves on the board. He sought and won state approvals for nursing homes from then-Gov. Andrew Cuomo’s administration in 2016.

There’s also a business proposal at play, hatched by the Hochul administration, that could aid hospitals linked to Rovt.

In July, the state Health Department told NY Presbyterian Weill-Cornell it would only grant approval of a new $8.4 million heart transplant center in Manhattan if the hospital formed a partnership with Rovt’s One Brooklyn system, or another operator, to provide $50 million in primary health care in Brooklyn and Queens, the Empire Center for Public Policy reported.

“She would be an extremely valuable person for anybody in the health care industry to know and have a relationship with,” Empire Center’s health analyst Bill Hammond said of Hochul.

Meanwhile, the Daily Beast wrote in a 2021 expose of Rovt’s business dealings during the COVID-19 outbreak: “The vast domain Rovt built with his state contracts, grants, and approvals were the scene of some of the outbreak’s worst carnage.

The Ukrainian native, who made a killing selling fertilizer in the old Soviet Union, has already maxed out in giving donations to Hochul alongside his wife — with the couple giving a total $139,400 to her campaign.

He is an active philanthropist, particularly involving Jewish causes. He had relatives who died in the Holocaust. A source involved in a charity who met Rovt in his office said he was accompanied by an armed private security guard.

The mogul owns at least 30 properties in New York and owns the IBE Trade Corp as well as a trophy property at Bankers Trust building at 14 Wall St., a 37-story building that he bought with cash 10 years ago.

The mogul bought another property on East 63 Street in 2005, which Forbes magazine called his “Man Cave.” He gutted the place and rebuilt it with reinforced concrete with brick facing and retractable bulletproof shades covering the windows. It also included a cigar room, 12 bathrooms and solid 14-karat gold fixtures in the master bath.

He later sold it.

The couple has donated more than $2 million to candidates over the years — including Donald Trump, Chuck Schumer, Andrew Cuomo, Hillary Clinton and hundreds of thousands of dollars to the New York State Democratic Committee — and even bad boys like ex-congressman Anthony Weiner and former councilman Hiram Monserrate.

Another recipient of his financial largess – the felonious ex-state Sen. Carl Kruger – even had the upper chamber of the state Legislature pass a resolution in his honor in 2009, just months after $9,500 of Rovt cash landed in his campaign war chest.

Hochul’s campaign and government office remained mum Friday on her visit to Rovt’s townhouse, declining repeated requests for comment on the purpose of the meeting.

Rovt was born in Carpathia, a western region of Ukraine that been claimed at different times by the Hungarians, the Nazis, and then the Soviets. He identifies as a Carpathian.