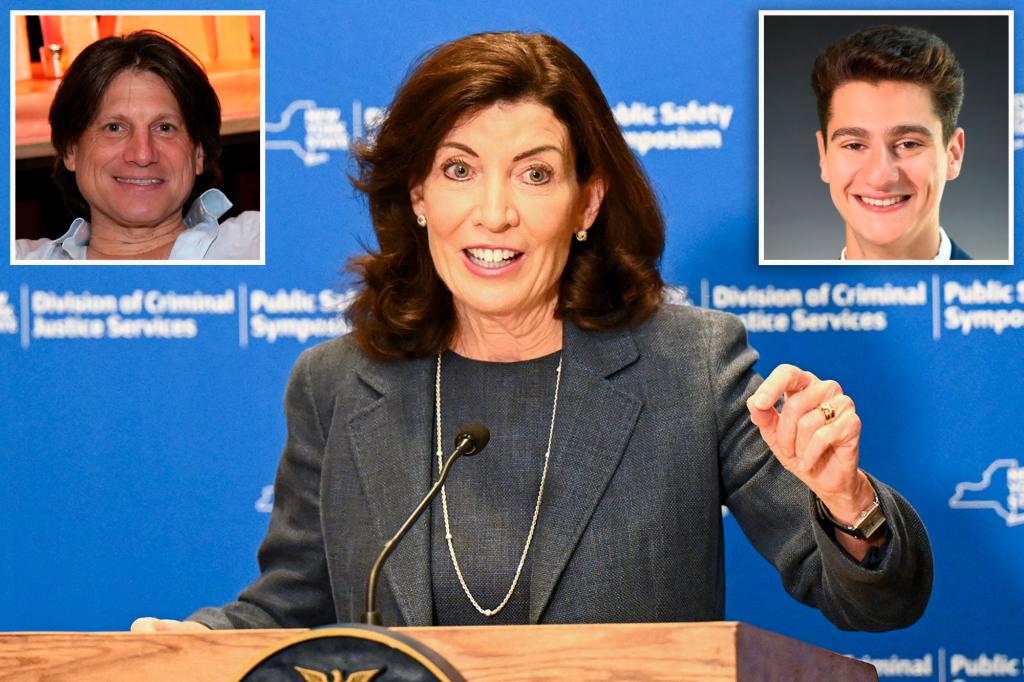 
The son of a major Kathy Hochul donor was hired by her campaign right around the time his father hosted a fundraiser for the Democratic governor — and just weeks before the dad’s company scored what’s being called a “pay-to-play” deal to sell the state $637 million in overpriced COVID-19 tests.

James Tebele, 21, has a resume that starts with a 2016 summer internship at his dad Charlie’s New Jersey-based Digital Gadgets consumer technology company, which pivoted to selling masks, gowns, sanitizer, thermometers and at-home rapid tests during the pandemic.

Now a student at New York University’s Schack Institute of Real Estate, James Tebele began working for Hochul’s campaign as a finance intern in November — and appears to have risen up the ranks, or at least pay scale, of her campaign as his dad’s fundraising for the governor increased.

On Nov. 22, Charlie Tebele — whose family has donated over $300,000 to Hochul — spent $5,150 on food, decorations and servers for a Hochul fundraiser and his wife, Nancy Tebele, also donated $18,000 to the governor’s campaign that day, the Albany Times Union first reported earlier this month.

Just four days later, Hochul suspended competitive-bidding rules for the state’s purchase of COVID-19 supplies, leading to the first of two contracts awarded to Digital Gadgets for a total of 26 million test kits.

Despite the rapid confluence of events, and her campaign’s hiring of James Tebele, Hochul has maintained that she “was not aware that this was a company that had been supportive of me” — an assertion rejected and ridiculed by her critics.

“The governor attended an in-person fundraiser hosted by the donor and hired one of his family members, but claims she was unaware of any connection. It’s laughable,” Assembly Minority Leader Will Barclay (R-Fulton) said Wednesday.

The first contract — inked on Dec. 20 — charged taxpayers $13 per test, even though Hochul’s administration had recently struck a deal to buy similar tests from another supplier for just $5 each, according to the Times Union.

Digital Gadgets charged the state an average of $12.25 per test — costing taxpayers a total of $268 million more than if officials bought the “Carestart” tests directly from the manufacturer instead of using Charlie Tebele as a middleman, the Times Union said.

Since May 2021, Charlie Tebele and his relatives have donated a total of around $310,000 to Hochul and her running mate, Lt. Gov. Antonio Delgado, according to campaign finance reports.

Tebele hosted a second fundraiser for Hochul in April, shortly before son James’ LinkedIn profile shows he was promoted from “finance intern” to “finance associate” for her campaign.

The new job came with a raise that boosted his monthly pay from about $1,270 to nearly $3,700, a nearly threefold increase, campaign finance records show.

A source with knowledge of James Tebele’s work for the Hochul campaign described him as a “junior staffer” and “not a high-up person” whose main responsibilities included helping compile lists of potential fundraiser attendees.

“He did name tags for the fundraisers,” the source said.

Hochul — who faces Republican challenger Lee Zeldin in the Nov. 8 gubernatorial election — has denied any wrongdoing and on Wednesday told reporters in Albany that she didn’t regret the deal with Digital Gadgets, despite the calls for a probe of potential “pay to play”, saying, “I would do that all over again.”

It’s unclear what task James Tebele, who apparently lives in his parents’ swank $11.5 million townhouse in Manhattan’s Lenox Hill neighborhood, was performing at the time.

His job with Hochul’s campaign wasn’t the first time he was employed by a politician to whom his parents made hefty contributions.

But the Tebeles’ connections to and jobs with New York power players runs deep.

The following May, James Tebele began a four-month internship at NYC Service, a division of the mayor’s office, where he promoted volunteerism and public service at career fairs and college campuses, according to his resume.

Beginning in September 2017, de Blasio and his political action committees were rewarded with more than $150,000 in political contributions from Charlie and Nancy Tebele.

In May 2019, de Blasio again hired James Tebele, this time as a communications staffer for his quixotic presidential bid, but it’s unclear if he got paid for that work.

Hochul campaign manager Brian Lenzmeier said in a statement, “Every member of our team is here on their own merits because they believe in Gov. Hochul’s vision for our state.”

“These are staffers who have dedicated their careers to working long days, in a high-stakes environment for the right reasons,” Lenzmeier added.

James Tebele declined to comment and representatives for his dad and de Blasio didn’t immediately respond to inquiries.