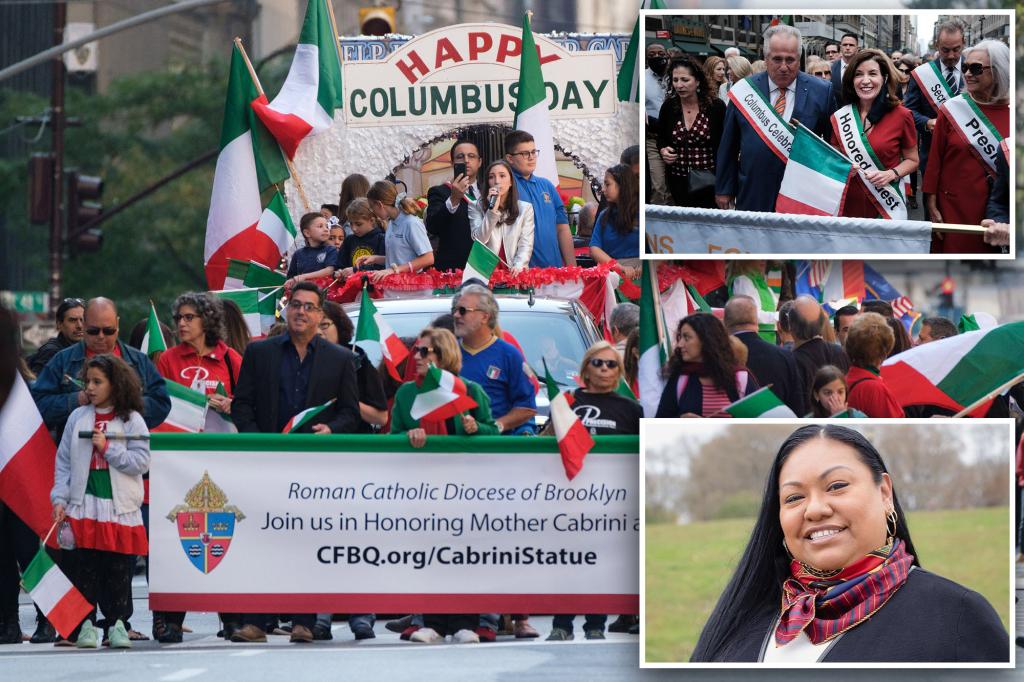 
‘Tis the season … for New Yorkers to engage in a woke debate about Christopher Columbus.

Democratic socialist Assemblywoman Marcela Mitaynes (D-Brooklyn) formally introduced legislation Friday to scrap the October holiday honoring the famed explorer – who is a symbol of ethnic pride or colonial genocide depending on who you talk to.

While honored for centuries for his navigational skills, the 15th-century Italian explorer — whose voyages for Spain helped pave the way for the colonization of the Americas — has become the target of a growing campaign to knock him off his historical pedestal.

But with the holiday in his honor becoming a celebration of Italian heritage — the notion of stripping it away has sparked a culture war.

“[Columbus] Day is Italian-American Pride Day that we’ve been celebrating for 100 years. Stop trying to take down the Columbus statue and take away our day. We are never, ever going to give that up! Never, ever!  It will never, ever happen!” the “Bronx Tale” star and auteur added about protecting Columbus’ good name.

NYPD officers guarded Columbus monuments for nearly two years following civil unrest in the summer of 2020 where statues of the explorer and other white historical figures were targeted for removal by leftwing activists in New York City and around the nation.

A Columbus statue even got swiped in 2020 from an Upper West Side apartment building and vandals managed to slap “f–k Columbus” on the Midtown statue in his honor at 59th Street the following year.

Pushback against such efforts though have hardly dissuaded Albany Democrats from their efforts to cancel the mariner.

“Indigenous People’s Day reimagines Columbus Day and changes a celebration of colonialism into an opportunity to reveal historical truths about the genocide and oppression of indigenous people in the Americas, to organize against current injustices and to celebrate indigenous resistance,” reads a legislative memo.

Albany Democrats say they are aiming to pass the bill as soon as next year once the state Legislature reconvenes for its scheduled 2023 session despite fierce pushback from Italian-Americans.

Mitaynes, who is of indigenous Peruvian descent, did not provide comment by publication time about the bill she is sponsoring alongside state Sen. Jessica Ramos (R-Queens).

The renewed push behind the bill, which was introduced in the state Senate in January, comes a year after New York City schools renamed Columbus Day as “Italian Heritage Day/Indigenous People’s Day” in an effort to mute divisions over his legacy.

Columbus Day is a federal and state government holiday celebrated on the second Monday of October, Oct. 10 this year. In New York City, the holiday is now celebrated as Italian American Heritage Day/Indigenous People’s Day.

“As an Italian-American, this bill is as offensive, as it is unnecessary. Italian-Americans have contributed greatly to our state and like many ethnic groups, deserve to have their heritage recognized. We can have a separate holiday to recognize indigenous people,” Assemblyman Mike Lawler (D-Rockland)

, who is running for Congress, tweeted Monday.

Columbus, whose life preceded the formation of modern Italy by centuries, reached the West Indies in 1492 while sailing for spice-rich areas of Asia. He later oversaw the enslavement of indigenous Arawak and Carib people to gather gold for the Spanish Empire.

He made four voyages in total, including one that reached Puerto Rico, and was later credited with discovering the Americas despite the presence of millions of indigenous people, many of whom died of diseases brought by invading Europeans.

“Christopher Columbus did not discover America,” notes the memo attached to the bill, which failed to pass either chamber in past years.

“Memorializing the indigenous history of our state is more than a symbolic gesture,” Ramos, who also has indigenous roots, said in a text.

“As we face a worsening climate crisis, taking opportunities to teach our children about our origins and responsibilities as stewards of our planet is important,” she added.

“[The] bill won’t see the light of day. What she has done is energize the Italian-American community to defend Columbus and his discovery and achievements,” Angelo Vivolo, president of Columbus Heritage Coalition, told The Post.

Gov. Kathy Hochul got blowback last year from Italian-Americans after firing a gubernatorial liaison and supposedly snubbing the Little Italy community by approving $20 million in grants to neighboring Chinatown, criticism that she muted by pushing $1 million in funding for a new Italian-American museum.

While the Legislature is not slated to meet for several more months, critics of the bill are already getting ready for a fight over the bill.

“Make no mistake, this is a serious escalation coming at a critical time,” reads a Sept. 25 letter from the Coalition.

“The bill cynically ignores the many positive contributions of the Spanish and Latino cultures to the Western Hemisphere and the hundreds of millions of immigrants who followed Columbus in search of a better life,” the letter adds.