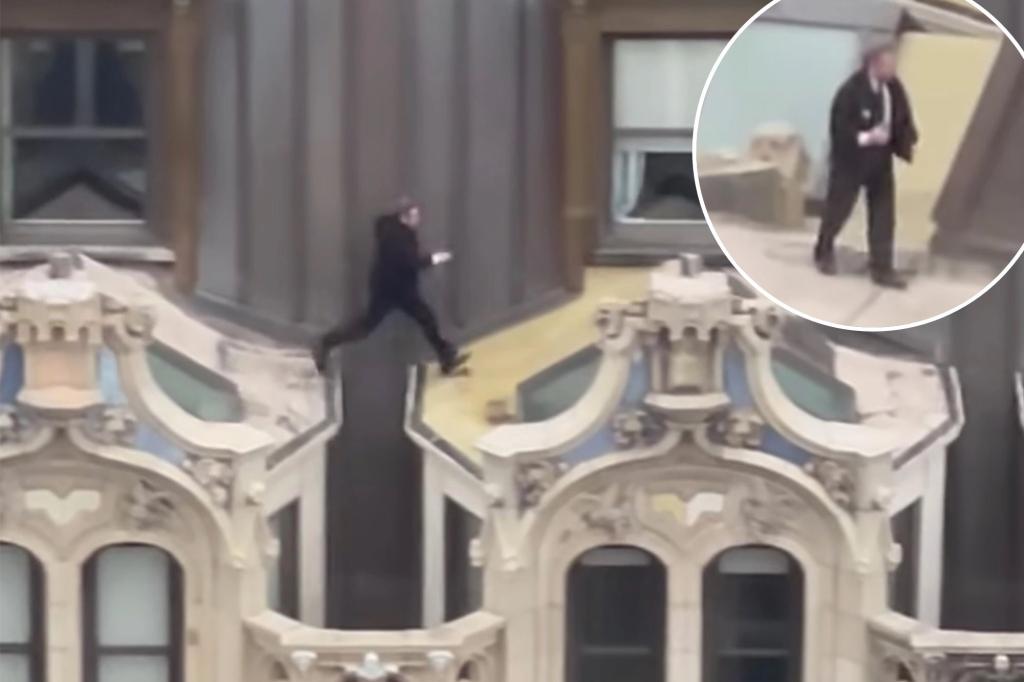 A dapper daredevil seen jumping between the rooftop awnings of a Manhattan high-rise is a contractor for the building — who was checking on a leaky skylight when he took the pulse-pounding leaps, The Post has learned.

The well-dressed worker was caught in a viral video mysteriously hopping from awning to awning hundreds of feet above the street on the roof of 90 West St. Tuesday.

A resident of the 115-year-old building, who identified herself as Andrea, said the light-footed construction worker climbed through the window of an apartment on the 23rd floor after snapping photos of the leak in her home.

“My skylight leaks — it’s been raining for five days. Andrew, the super in the building, got the construction guy to come up and look at it,” said Andrea, who lives on the 22nd floor.

“Next thing I know, I’m in the kitchen looking up at him and he’s up there on the skylight taking pictures,” she told The Post Wednesday.

She said the contractor — who wore a suit and dress shoes while making the daring jumps— climbed onto the roof with no apparent protective line or equipment.

“He was really on top of those roofs with nothing. I mean, I just thought it was a little crazy. That’s all there was to it,” she said. “He got out through a window on the 23rd floor and that’s all there is to it.”

Stunning video posted on Instagram shows the daredevil making a phone call on the roof before leaping across at least five awnings, each designed with dramatic slopes and no protective barrier.

In the video, shot by Emmy Award-winning film director Erik Ljung, an observer can be heard saying, “Usually it’s like a teenage kid that does s–t like this.”

“Yeah, but it’s an older dude wearing a suit,” another responds.

The name of the contractor was not immediately clear on Wednesday.