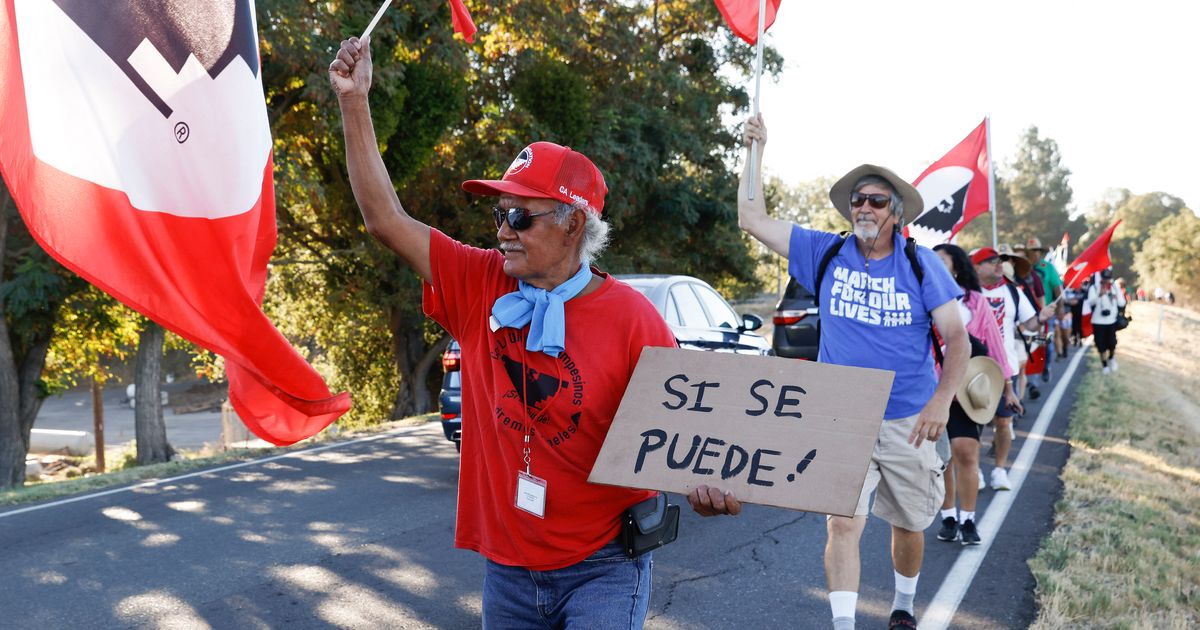 SACRAMENTO, Calif. (AP) — A broadly smiling California Gov. Gavin Newsom joined about two dozen jubilant, cheering farmworkers camped outside the state Capitol Wednesday to sign one of the most contentious bills before him this year, reversing course on a measure to help farmworkers unionize after President Joe Biden and Vice President Kamala Harris supported it.

The White House support pinned Newsom in a difficult political position after his office announced before Democratic lawmakers sent him the bill that he would not sign it.

But Newsom approved the bill only after he, the United Farm Workers and the California Labor Federation agreed on clarifying language to be considered during next year’s legislative session to address his concerns around implementation and voting integrity.

The agreement includes a cap on the number of unionization petitions over the next five years and will allow state regulators to better protect worker confidentiality and safety, Newsom’s office said.

“Sí, se puede,” the farmworkers chanted as Newsom signed the bill, echoing the UFW’s longtime slogan — roughly, “Yes, we can” in Spanish.

“California’s farmworkers are the lifeblood of our state, and they have the fundamental right to unionize and advocate for themselves in the workplace,” Newsom said in a statement after signing the bill. “Our state has been defined by the heroic activism of farmworkers, championed by American icons like Cesar Chavez, Dolores Huerta, and Larry Itliong. California is proud to stand with the next generation of leaders carrying on this movement.”

The new law will allow farmworkers who provide much of the nation’s fruits and vegetables to vote by mail in union elections as an alternative to physical locations. Proponents say that would help protect workers from union busting and other intimidation, while owners say such a system lacks necessary safeguards to prevent fraud.

It will give owners a choice between “a flawed mail-ballot scheme or … an unsupervised card-check scheme,” said the California Farm Bureau Federation in opposition before Newsom announced the agreement on additional safeguards.

Newsom vetoed similar legislation last year, as did his two most recent predecessors.

BREAKING: I just signed a bill that will expand farmworkers’ union rights. ✊🏽

They deserve the fundamental right to advocate for themselves in the workplace. pic.twitter.com/3xKPS4ssEb

Democratic Assemblyman Mark Stone added provisions to this year’s version that would let the law expire after five years unless it is renewed by lawmakers, and requiring the Agricultural Labor Relations Board to handle the ballots.

Newsom has been positioning himself for months as a leading national Democratic voice calling out red state governors, fueling speculation that he has presidential ambitions despite his repeated denials. Newsom’s PlumpJack Group owns several wineries among other properties, although the governor put his business holdings into a blind trust before he took office.

The governor’s early reluctance to sign the labor-backed bill puzzled Shaun Bowler, a professor and dean of the graduate division at the University of California, Riverside, political science department.

“After all, if he does have political ambitions post-governor he will need the unions’ help more than that of the growers,” Bowler said. “There is a very clear political reason to support the bill.”

Mike Madrid, a Republican strategist in California who specializes in Latino voting trends, read Biden’s Labor Day statement strongly supporting the legislation as an effort to take Newsom down a notch.

“I think it’s impossible to avoid the reality that there’s a little bit of tension between these two politicians because of Gavin’s posture in leaning into this presidential rumor mill,” Madrid said. “It’s basically just a reminder of who the sheriff is.”

“So now he’s in a corner because if Gavin Newsom signs it, it’s Joe Biden’s victory, and if he doesn’t, he’s outside the mainstream of where the president thinks he should be on something the Democratic Party believes is of great value to the Latino community,” Madrid added.

We look forward to working with Governor Newsom and the legislature to make agreed upon changes that will ease implementation of #AB2183 so farm workers can participate in elections free from intimidation and deportation beginning next year.

However, Biden has long supported the union. He keeps a bust of union co-founder Cesar Chavez in the Oval Office and Chavez’ granddaughter, Julie Chavez Rodriguez, is Biden’s director of intergovernmental affairs.

“In the state with the largest population of farmworkers, the least we owe them is an easier path to make a free and fair choice to organize a union,” Biden said in his statement.

Jack Pitney, a political science professor at Claremont McKenna College, said Biden seemed to be reflecting his longstanding support for unions, while Newsom had the more delicate task of balancing labor relations against an agricultural industry that also is struggling.

“I don’t think Biden stays up at night worrying about Gavin Newsom,” Pitney said, and is more focused on rallying union support for Democrats in the midterm elections.

Harris also tweeted Biden’s statement, adding that “California farm workers have gone above and beyond” to feed Americans.

Adding to the pressure, the struggling UFW recently rejoined the umbrella California Labor Federation. The issue of farmworker unionization became more critical to labor in 2020 after the U.S. Supreme Court — a favorite Newsom target — ruled that union organizers had no right to access farmers’ properties to talk to their workers.

Still, Democrats have been giving the UFW outsized and symbolic importance for 50 years that stereotypes Latino voters and draws attention away from much more significant and widespread economic concerns, argued Madrid.

“These are important issues but less than 1% of Latinos are farmworkers. Let’s quit pretending like this is the reality of the Latino experience in modern America,” Madrid said. “It’s so marginalizing (that) it’s offensive.”

“That gets him some credit” with Black and Latino workers as he runs for reelection in November, but most already were likely to support him over his Republican challenger, Pitney said.