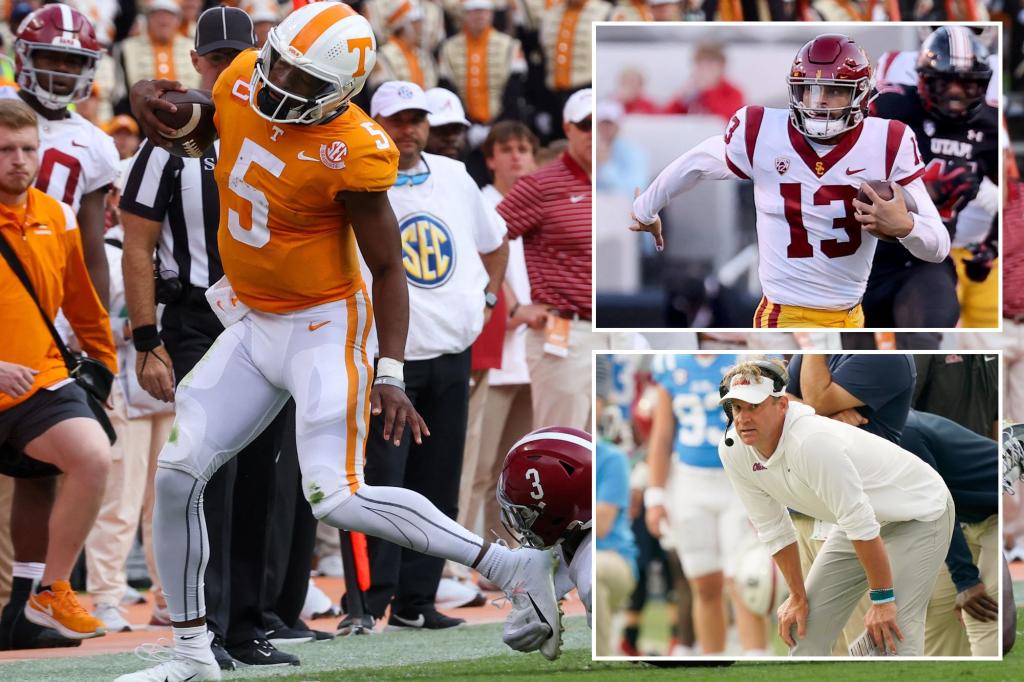 The bye is next week, although Vanderbilt did a good impression of one in a 55-0 drubbing. It will be a stress-free few weeks for the Bulldogs.

The Big Ten is a two-team league, as Ohio State and Michigan have shown in one-sided victories in recent weeks. The two bitter rivals are unlikely to sweat until The Game on Thanksgiving weekend.

Tennessee put up 567 yards of offense and 52 points on Alabama and didn’t even have star receiver Cedric Tillman. This offense will get even better when he returns from a high ankle sprain.

The Clemson defense alternates from dominant to pedestrian, one week shutting down an opponent and the next nearly blowing a game. The Tigers aren’t a real title threat until that unit develops consistency.

Michigan treated Penn State’s robust rushing defense like a JV unit, blistering the Nittany Lions for 418 yards and four touchdowns on the ground.

Discipline and defense, usually areas of strength for Nick Saban-coached teams, let down Alabama. The Tide allowed 567 yards of offense and committed a whopping 17 penalties for 130 yards — the most during the Saban era in Tuscaloosa — in the three-point loss to Tennessee.

Lane Kiffin and Co. are in the driver’s seat to win the SEC West for the first time following Alabama’s loss at Tennessee. The Bulldogs will host the Crimson Tide on Nov. 12, a meeting that could decide the division title.

Three of the Horned Frogs’ last four wins have come by a single score, showing this team’s character. Saturday was the most impressive win, a double-overtime victory over previously undefeated Oklahoma State in which TCU trailed by as many as 17 points.

The Pac-12’s only undefeated team is in the spotlight this week, visiting Oregon with a chance to take another step forward as an unlikely playoff contender.

The Ducks have averaged 49.5 points per game since that season-opening no-show against Georgia.

This was his early Heisman moment, 385 yards through the air, five scores and two clutch throws in the final seconds to lead Tennessee to its first win over Alabama since 2006.

It must’ve felt like being back at Oklahoma for Williams, throwing for 381 yards and five scores, but somehow winding up on the losing end.

Uiagalelei has produced multiple touchdowns in every game this year. That happened just three times all of last season for the junior.

Alabama couldn’t have asked for anything more from Young in his return from a sprained AC joint in his right shoulder. The sophomore nearly carried his team to victory, throwing for 455 yards and two scores. He didn’t get enough help.