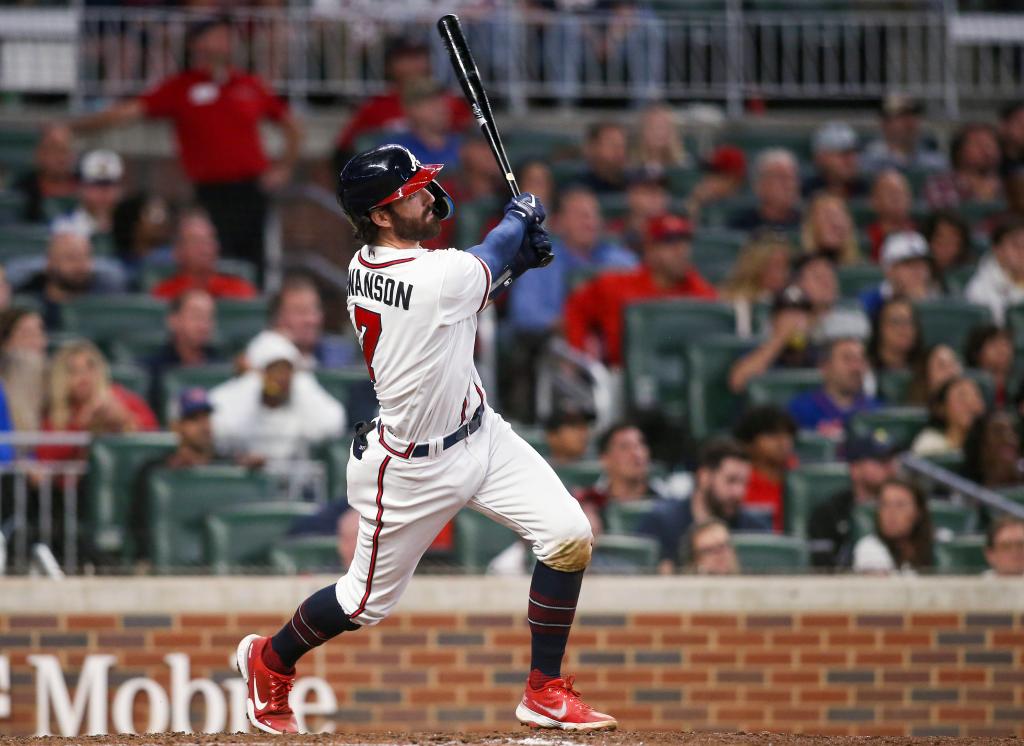 
ATLANTA — When the Mets open a series with Jacob deGrom and Max Scherzer pitching back-to-back, shows of power are expected.

But not by the other team.

A few of the Braves’ potent bats outmatched the Mets’ dynamic arms through the first two games of the biggest series of the season. Dansby Swanson, Matt Olson and Austin Riley were right in the middle of the Braves’ scoring outbursts again Saturday night in the Mets’ 4-2 loss at Truist Park.

The Atlanta trio combined to go 11-for-23 with five home runs and seven RBIs as the Braves clinched the series victory and moved a game ahead of the Mets in the NL East.

Pete Alonso, Francisco Lindor and Jeff McNeil have certainly not been the Mets’ problem. They combined to go 8-for-23, but with just one RBI. The Mets have succeeded this season by stacking hits together, which is more challenging against the game’s best pitching, while the Braves’ literal strength has flourished.

“That’s what we do. We hit homers,” Braves manager Brian Snitker said of a club that has slugged more dingers than everyone except the Yankees. “It’s how our team is. You can’t explain it. It’s just what we are.

“That’s saying something when you do it off those guys.”

On Friday, Riley and Olson crushed back-to-back home runs off deGrom in the second inning, before Swanson added one of his own in the sixth.

A night later, the Braves opened with some smallball. In the fourth inning, Riley roped a double over third baseman Eduardo Escobar’s head before Olson guided a single against the shift to tie the score at 1-1.

Atlanta closed Saturday with bigger ball. In the fifth inning, Swanson took the Braves from one down to one up, ripping a 432-foot, two-run homer off Scherzer into the seats in left-center for a 3-2 edge.

“It’s a huge momentum thing,” said Swanson, the All-Star shortstop. “It’s just not easy to string together that many hits off guys like that. You’ve got to be opportunistic.”

In the sixth, Olson crushed Scherzer’s second pitch of the inning for his 32nd home run of the season, a solo shot that finished the game’s scoring. Olson, who has replaced Freddie Freeman at first base in Atlanta, may also have inherited the Mets-killer role.

“Those are no slouches out there by any means,” Olson said of the Mets’ co-aces. “A couple of the best pitchers in baseball.”

The Mets had just three fewer hits than the Braves in the games Friday and Saturday, but they scored five fewer runs. The Braves can sell out to load up a mighty swing against deGrom and Scherzer, and rare misses get punished, not with singles, but with homers.

The Braves’ stars are beating the Mets’ stars, but Atlanta’s approach is also winning.

“We do have a lot of power throughout the order,” Olson said. “The ability to change [the game] with one swing is nice, especially when you’re at home and can fire up the crowd and put a little momentum on your side.”

The Mets’ staff got away with little over the past two games, while the Braves — and their stars — have begun trying to get away from the Mets in the NL East race.