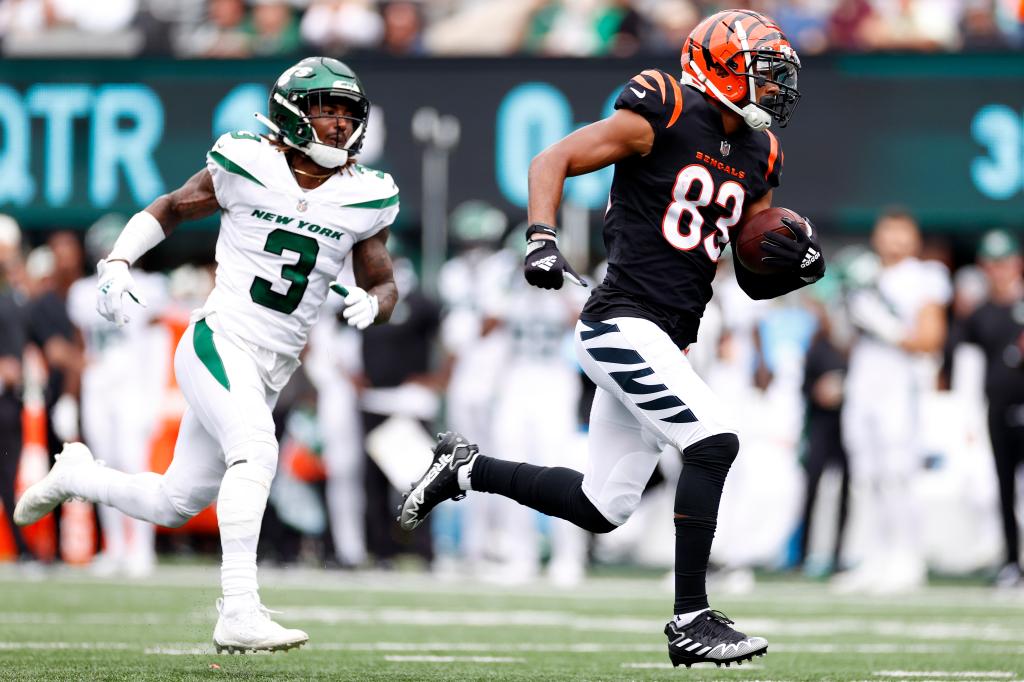 
Zach Wilson appears poised to be medically cleared and ready to return under center for the Jets this week when they play at Pittsburgh.

Great news for all involved.

“I think it’ll bring some motivation,’’ linebacker C.J. Mosley said Monday about the impending return of the second-year starting quarterback from a left knee injury, which has had Wilson sidelined since the preseason opener. “Zach is ready to get out there.’’

Yes, but is the defense ready to do its part to help make the return of Wilson successful?

The Jets defense through three games — they have a 1-2 record and are ranked 26th in the league in points allowed and 16th in yards allowed — has been underwhelming so far in relation to the lofty expectations entering the season. There simply haven’t been enough impactful plays made in critical moments. That was a glaring difference in the loss 27-12 to the Bengals on Sunday.

Cincinnati’s first touchdown came on a third-and-goal from the 12, with Joe Burrow shaking free from the pass rush and finding running back Samaje Perine in a soft open spot at the goal line for a 7-0 lead on the opening drive.

Then came the killer roughing the passer penalty on defensive tackle John Franklin-Myers on a third-and-9 incomplete pass that would have forced a punt and given the Jets ball trailing just 7-6.

Three plays later, on third-and-7, Burrow hit Tyler Boyd on a 56-yard catch-and-run touchdown for a 14-6 lead thanks to an egregious missed tackle by safety Jordan Whitehead.

The Bengals’ third and final touchdown came on — you guessed it — a third-down play. On third-and-goal from the Jets’ 5-yard line, Burrow connected with his best receiver, Ja’Marr Chase, who was left uncovered in the end zone while both cornerback Sauce Gardner and Mosley inexplicably were both covering running back Joe Mixon away from the play.

That was a clear communication gaffe, the second in as many weeks by the defense that led to touchdowns.

This led to frustrated cornerback D.J. Reed, who came to the Jets this offseason after playing with the 49ers and Seahawks (both winning organizations), saying after the game that a players and coaches meeting was in order to sort out the communications issues.

Head coach Robert Saleh on Monday called “the story with our defense right now’’ is its failures on third down.

“Third down is where we gave up all three touchdowns [to the Bengals],’’ Saleh said. “Critical mistakes at the most inopportune times. It’s crappy luck. We’ve got to find a way to not be so darned snake-bit where it explodes in our face.’’

This is more than simply being “snake-bit,’’ though.

While the Jets have been getting strong contributions from a number of players — such as Reed and Gardner at cornerback, defensive tackle Quinnen Williams, who’s having a terrific season, and his brother, linebacker Quincy, who was the best player on the field Sunday before being knocked out with a high ankle sprain — other players who figured to be big contributors have not.

Pass rusher Carl Lawson, who’s coming off an Achilles injury in 2021, has been virtually invisible with just a half-sack, five quarterback hits and one tackle for a loss.

The two safeties — Whitehead and Lamarcus Joyner — haven’t met expectations. According to Pro Football Focus, Whitehead has missed six tackles in three games and has a 150.3 passer rating against him. Joyner, meanwhile, has a perfect 158.3 passer rating allowed on passes thrown his way and has four missed tackles.

This was supposed to be one of the most upgraded positions on the team in the offseason, with the addition of Whitehead and the return of Joyner from injury.

Mosley, the leader of the defense and a team captain, knows it has to be better.

“We have the right players — the right young players and the right veterans — to do those things,’’ he said.

They’d better start doing those things Sunday in Pittsburgh, because Wilson, who hasn’t even played a full two series of preseason football, is going to need all the help he can get.

“It doesn’t really matter who’s at that spot,’’ Mosley said of quarterback. “We have to execute regardless. We can have the best quarterback in the world … but if we’re not executing as a team it won’t matter.’’

No truer words have been spoken.