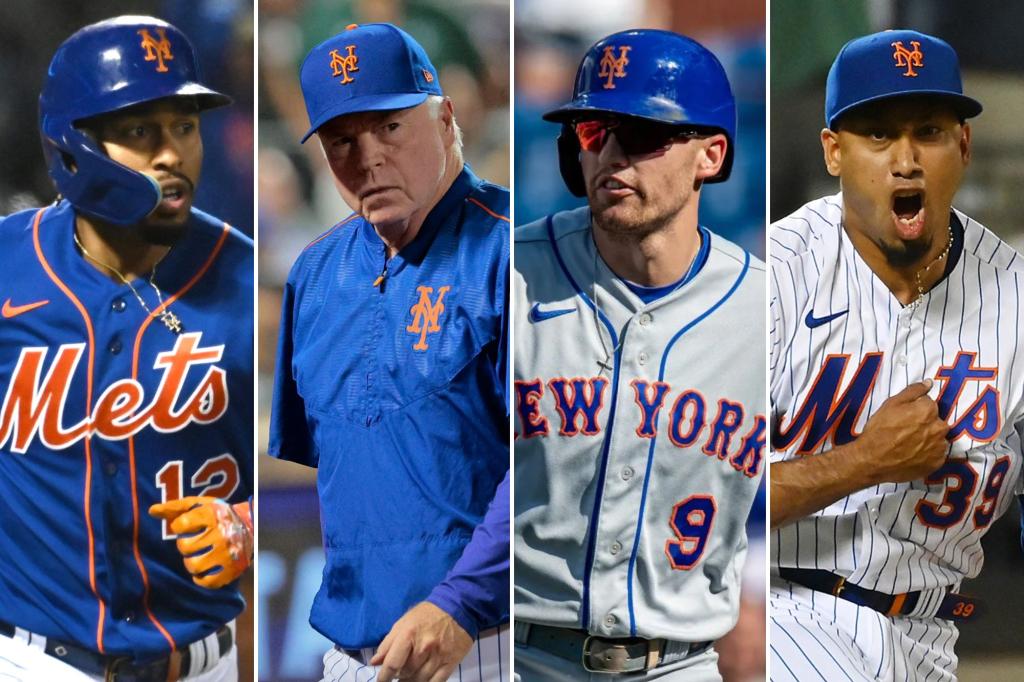 
Each spring training, our Post editors ask us to preview the Mets’ season and identify the team’s strengths and weaknesses while adding our own predictions.

Normally these previews are well-received, but also long forgotten by the season’s conclusion. Not this year. This is a new era of accountability, and we’re all for it.

So let’s take a look at what we projected for these 101-win Mets before the season started and see how it ended.

What we wrote: Francisco Lindor’s contract extension, worth $341 million over 10 seasons, is about to start. Simply, the Mets need Lindor to revert to the form last seen from him in 2019, when he posted a .854 OPS. Lindor has actually regressed in each season since 2018, when he reached his peak with Cleveland.

Post-script: We were close on this one. Ultimately, Pete Alonso was probably the team’s most important hitter based on the power element he brought with 40 homers and 131 RBIs, but Lindor had an impressive rebound season for the Mets, posting a .788 OPS while bringing consistency to the lineup.

What we wrote: The Mets’ season started plummeting last year once Jacob deGrom hit the injured list to begin the second half. To that point, the ace right-hander was having a season for the ages, with a 1.08 ERA in 15 starts … Even with Max Scherzer’s arrival, if the Mets are going to have a season that results in plentiful October baseball, they will need deGrom back for a big chunk, healthy and performing at his standard level.

Post-script: DeGrom was certainly important, but we’re not so sure he was the Mets’ most crucial pitcher this season. That distinction probably belonged to Edwin Diaz, who had an epic season in the closer’s role, striking out 118 batters in 62 innings with a 1.31 ERA. The sounds of Blasterjaxx and Timmy Trumpet’s “Narco” at Citi Field usually signified a door slamming on the opposition.

Will have a bigger year than expected

What we wrote: J.D. Davis has become something of a forgotten man after a hand injury sidelined him for much of last season and then affected his productivity upon his return. But Davis still has a sweet swing and could provide juice from the DH spot and backing up at third base.

Post-script: Swing and a miss. Davis never got rolling, and his playing time diminished before he was dealt to the Giants at the trade deadline. Darin Ruf arrived in that deal and was an even larger disappointment for the Mets, leaving a gaping hole from the right side that prompted the Mets to give DH opportunities to Mark Vientos and Francisco Alvarez.

Most likely to disappoint

What we wrote: Robinson Cano is coming off a second PED suspension — this one cost him all of last season. He’s 39 years old and already has much of the fan base turned against him, as a reminder of the trade that sent top prospect Jarred Kelenic to Seattle before the 2019 season, plus Cano’s PED infractions. … The Mets have Jeff McNeil to play second base and Dominic Smith as a lefty DH option, so Cano won’t just be rolled out every day if he isn’t producing.

Post-script: Bingo. Cano struggled and got released by the Mets in May. He had brief stints with the Padres and Braves, but likely has played his last major league game. The Mets still owe him $20 million for next season in the final year of his contract.

What we wrote: Tylor Megill helped save the Mets’ rotation last season and will likely be an important arm again this year. Whether it’s filling in for deGrom early in the season or taking another rotation spot later, the Mets need him.

Post-script: Megill was on the right track before hitting the injured list in May. After his return, he struggled and then returned to the IL for an extended stay. David Peterson was the more significant call-up for the Mets. The left-hander pitched to a 3.83 ERA in 28 appearances, and helped keep the rotation afloat

with deGrom and Scherzer on the IL.

What we wrote: Over the years Buck Showalter has earned a reputation as a manager skilled in handling the bullpen. The Mets have several talented arms in the bullpen this season, but it will be Showalter’s job to assemble the pieces.

Post-script: The bullpen is still a puzzle. Adam Ottavino and Seth Lugo were dependable arms leading into Diaz, but there was more uncertainty than the Mets would have liked.

Don’t be surprised if

What we wrote: Tomas Nido splits time behind the plate with James McCann this season or becomes the starting catcher altogether. Nido has improved offensively in recent seasons and his pitch-framing skills remain superb.

Sure to make fans grumble

What we wrote: The Mets are banking heavily on Brandon Nimmo to anchor the outfield. But with his penchant for injuries, Nimmo also presents a risk. If he needs an extended stay on the injured list, a large segment of fans will undoubtedly wonder why the team didn’t re-sign Michael Conforto. The Mets also have veteran legs in Starling Marte and Mark Canha and would prefer not to need Smith or McNeil to play the outfield for an extended stretch.

Will make the playoffs if

What we wrote: DeGrom returns from the IL and combines with Scherzer for at least 45 starts.

Post-script: DeGrom and Scherzer combined for just 34 starts, and the Mets still easily reached the postseason.

Will miss the playoffs if

What we wrote: The front office is searching the scrap heap for arms by June and last year’s underachievers in the lineup (led by Lindor) haven’t gotten their acts together.

Post-script: Trevor Williams and Peterson were solid plugging rotation holes, ensuring the Mets didn’t have to dumpster-dive for pitching. Lindor played at a high level.

Injury that would hurt the most

What we wrote: They have already found it. If the Mets have any kind of aura, it’s from deGrom standing on the mound every fifth day.

Post-script: The Mets survived deGrom’s absence. Losing Diaz would have sent the Mets into a tailspin.

The Mets, in losing the NL East to the Braves in a tiebreaker, have only themselves to blame after failing to win a game in Atlanta last weekend. That said, it hasn’t gone unnoticed that the Braves had the benefit of a weaker schedule this season.

The Braves’ schedule included four games against the lackluster Red Sox (Atlanta went 3-1) instead of the Yankees. The Mets played the Yankees four times and split.

The Braves’ schedule included only six games against the powerhouse Dodgers (they went 2-4). The Mets played a seventh game against the Dodgers, going 4-3.

The Braves’ schedule included 10 home games against the Mets and nine road games, which in itself might not be a big deal except that head-to-head competition served as the tiebreaker for the division. The Braves went 7-3 against the Mets in Atlanta. The Mets went 6-3 against the Braves in New York. Maybe home field was a factor.

Gary Cohen’s name appears on the latest ballot for the Ford C. Frick award, which is presented each summer during the Hall of Fame ceremonies for baseball broadcasting excellence. Lindsey Nelson, Bob Murphy and Tim McCarver are past Mets recipients. Cohen, who has spent more than three decades in the Mets broadcast booth, is due for the recognition. His fastball remains sharp. That was evidenced during a recent SNY broadcast with newcomer Jerry Blevins that took Cohen out of his comfort zone of working with Ron Darling and Keith Hernandez. Cohen set up Blevins nicely, getting the most out of the former Mets reliever.

Beyond PUBG: Krafton Dreams of Ascending the World Stage