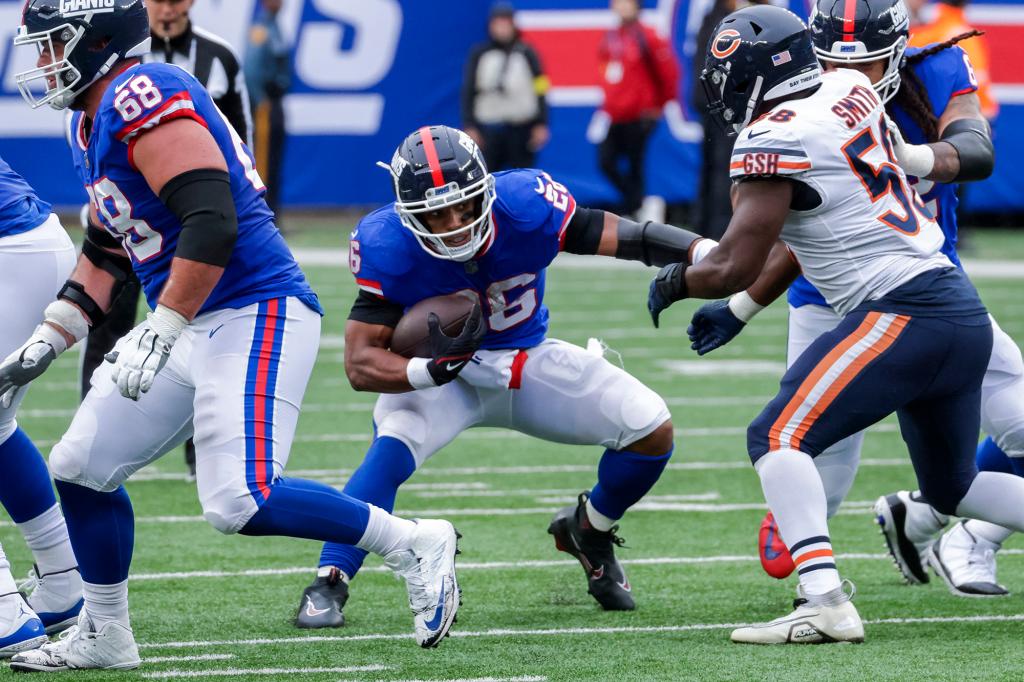 Is this any way to run an attack? The wide receivers were targeted eight times and had three catches for 25 yards. This was prehistoric at times with a ground game that in 44 rushing attempts amassed 262 yards. It was Saquon Barkley (31-146) and quarterbacks Daniel Jones (6-68, 2 TDs) and Tyrod Taylor (3-30). Barkley as a wildcat QB after Jones and Taylor went down? Wow. Barkley is having a great season. Jones (8 for 13, 71 yards) showed some nifty play-fakes and has a connection with rookie TE Daniel Bellinger (3-23). The line did not have many pass-blocking opportunities and the run blocking was on point. Converting 6 of 14 on third down without much of a passing attack is not easy.

The one-dimensional Bears actually threw it a little bit with Justin Fields (11 for 22, 174 yards) and ran for 149 yards, but only 60 after halftime, with Khalil Herbert (19-77) shut down in the first half and Fields (7-52) at times using his legs to his advantage. Dexter Lawrence had two of the team’s six sacks and on his first one he threw Fields to the turf like a rag doll. Tae Crowder (11 tackles) was all over the field and came up with a key third-down stop in the fourth quarter. Injuries to S Julian Love and CB Aaron Robinson created some chaos but Fields could not capitalize with his arm. LB Jaylon Smith in his first game this season had seven tackles. No touchdowns allowed is always a pathway to success. Young edge-rushers Azeez Ojulari and Kayvon Thibodeaux combined for a forced fumble and recovery.

Booming 59-yard punt by Jamie Gillan late in the fourth quarter led to a muff by Velus Jones Jr. that was recovered by Gary Brightwell. Gillan needs work on putting the ball down where he wants it. He sent two first-half punts bouncing into the end zone for touchbacks. Brightwell probably should have stayed in the end zone early in the third quarter rather than run a kickoff back to the 13-yard line. Jason Pinnock was called for running out of bounds on punt coverage. Justin Layne was called for a holding penalty on a punt return to cost the Giants 21 yards in field position. Graham Gano hit field goals from 44 and 43 yards but shockingly missed off the left upright from 37 yards.

By all accounts, there was no panic whatsoever when the Giants were down to no quarterbacks, as head coach Brian Daboll instantly went to work to find a solution. He’s a cool customer. Daboll won a replay challenge in the second quarter that wiped out an 11-yard Bears pass completion. Offensive coordinator Mike Kafka stuck with an extremely run-heavy plan. Is there any way for anyone to get the wide receivers involved? Wink Martindale let the dogs loose on Fields and the tackling was much better this week.