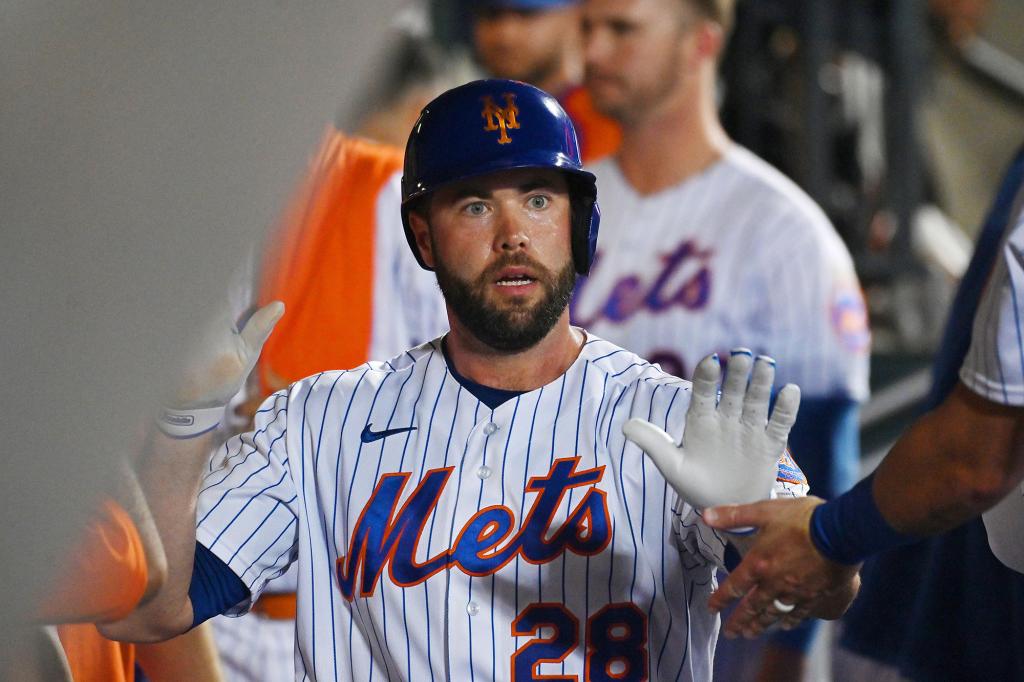 
Darin Ruf acknowledged what Mets fans have noticed: His at-bats since joining the club have not been great.

“It’s a constant process to figure out a lot of things with hitting,” the struggling part-time DH said before the Mets’ 6-4 loss to the Marlins at Citi Field on Tuesday. “Feeling comfortable in the box, getting your timing, making sure your pitch recognition is there.

Ruf, through 28 games since he was acquired at the trade deadline from the Giants, has not hit. Appearing generally against lefty pitchers, the righty slugger is batting just .152 without a home run as a Met.

He was acquired to fill the hole that J.D. Davis (who was traded for Ruf) never filled. While Daniel Vogelbach has excelled from the left side, Ruf has disappointed, which led to a conversation with assistant hitting coach Jeremy Barnes on Tuesday.

The two “went through some things that hopefully might help,” said Ruf, who did not reveal the specifics of the changes that are being worked on. “Just changing my approach a little bit to hopefully work with the role I have here a little bit more. Understand what the situation calls for.”

Ruf is running out of time to convince the Mets he belongs on their postseason roster. He and rookie Mark Vientos have been battling for at-bats at DH against opposing lefties, and neither has claimed the job. Vientos, though, smacked his first career home run Saturday.

The Mets faced three lefties starters in their recent series against Oakland. Ruf went 2-for-12 with a walk, and Vientos was 3-for-7 with that homer and two walks.

“I haven’t even thought about it,” Ruf said, when asked if there was enough time to make a push for the playoff roster. “I’m trying to figure out today and figure out how to have the best at-bat that I can and move forward from there.”

The Mets will face lefty Jesus Luzardo in the finale against the Marlins on Wednesday. Braves lefty Max Fried is expected to pitch in the upcoming series, and it will be curious to see whether manager Buck Showalter opts for Ruf or Vientos.

If neither steps forward, the Mets could give an audition to Francisco Alvarez, hitting well at Triple-A, though they would have to petition the league to add him to the postseason roster. Against lefties, they also could try to maximize their defense by playing lefty-hitting Luis Guillorme at third and using Eduardo Escobar at DH.

It is possible this Mets-Marlins series will be the final time Showalter will manage against Mattingly, who will be leaving Miami after this season in a decision both he and the team have called mutual.

Showalter was Mattingly’s manager with the Yankees from 1992-95, and the two are close.

“Donnie’s just got such a pure heart,” Showalter said. “The game’s better with him in it, and I hope he continues. He’s as good a human being as he is a player and coach and manager, and that’s saying a lot.”

Mattingly and Showalter are united as respected baseball lifers who have never won a World Series. Showalter left the Yankees and Diamondbacks just before each won a title.

“It’s kind of like Indiana after Bobby Knight left,” Mattingly said, referring to the 2001-02 Hoosiers, which lost in the national championship. “They were really good [two years after Knight left], and then they kind of just fell apart. … His influence is there. Same thing with Buck.”

The Mets announced the installation of the “Amazin’ Deli interactive experience.” Fans can take pictures in front of the set that has been used for promotional materials this season. It is located behind section 131, in the left-field corner.