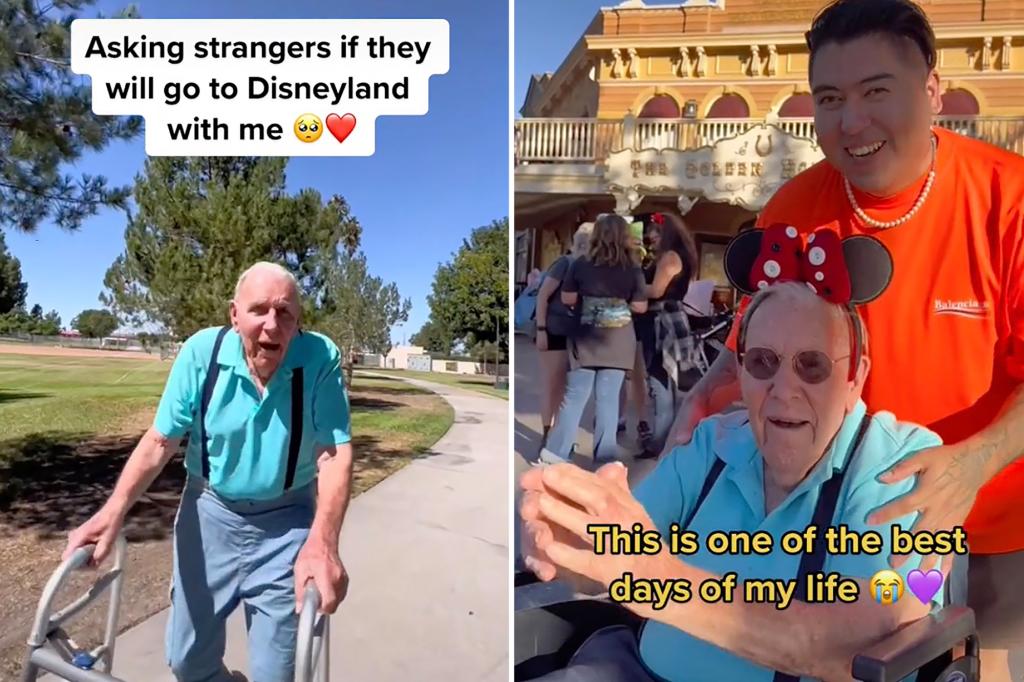 
It’s a sweet world after all.

TikTok users are drying their tears from watching social media star Isaiah Garza make an elderly man’s day by surprising him with the trip of a lifetime.

“I took a 100-year-old veteran to Disneyland & we became best friends,” Garza captioned the now-viral video, which has over 11.6 million views and 2.3 million likes.

Garza — whose social media bios say “once homeless & now changing lives” — starts the video by approaching the man outside, who is using a walker.

“I’m sorry to bother you, but I’ve had a really, really rough day and I just wanted to see if you’d be willing to go to Disneyland with me today,” Garza says.

“Hey, that’s great,” the suspenders-wearing gentleman laughs. “You really want to take me?”

A montage of the duo taking on the park follows. Garza pushes him around in a wheelchair as the pair ride the spinning teacups — which he notes was the man’s first ride in over 50 years — stop at the souvenir shop for some Minnie Mouse ears and take a quick dance break.

“How does it feel to be at Disneyland today?” Garza asks his new BFF.

“Oh my gosh, this is one of the best days of my life,” the man replies. “I feel like I might be dreaming or something.”

“I thought my life was over,” he adds. “I will remember this day for a long time.”

“You don’t know how much I appreciate this,” he says, beginning to tear up. “You really, really don’t know.”

“Guys!!! should I start a new series with him?!?!” Garza asked his 7.7 million followers in the comment section.

“Can we make this a trend of taking senior citizens out to do fun things?” another commenter asked.

“‘He started to cry’ meanwhile I’m sobbing,” another wrote.

“As someone that works with seniors I love this so much,” one responded.

“This is honestly one of the best videos I’ve possibly ever seen,” someone else said. “It was so awesome to see the joy brought to this man.”

Crooner Michael Bublé even commented, writing, “Everything about this is awesome.”

“Let’s have him come to a concert!!!!” Garza responded.