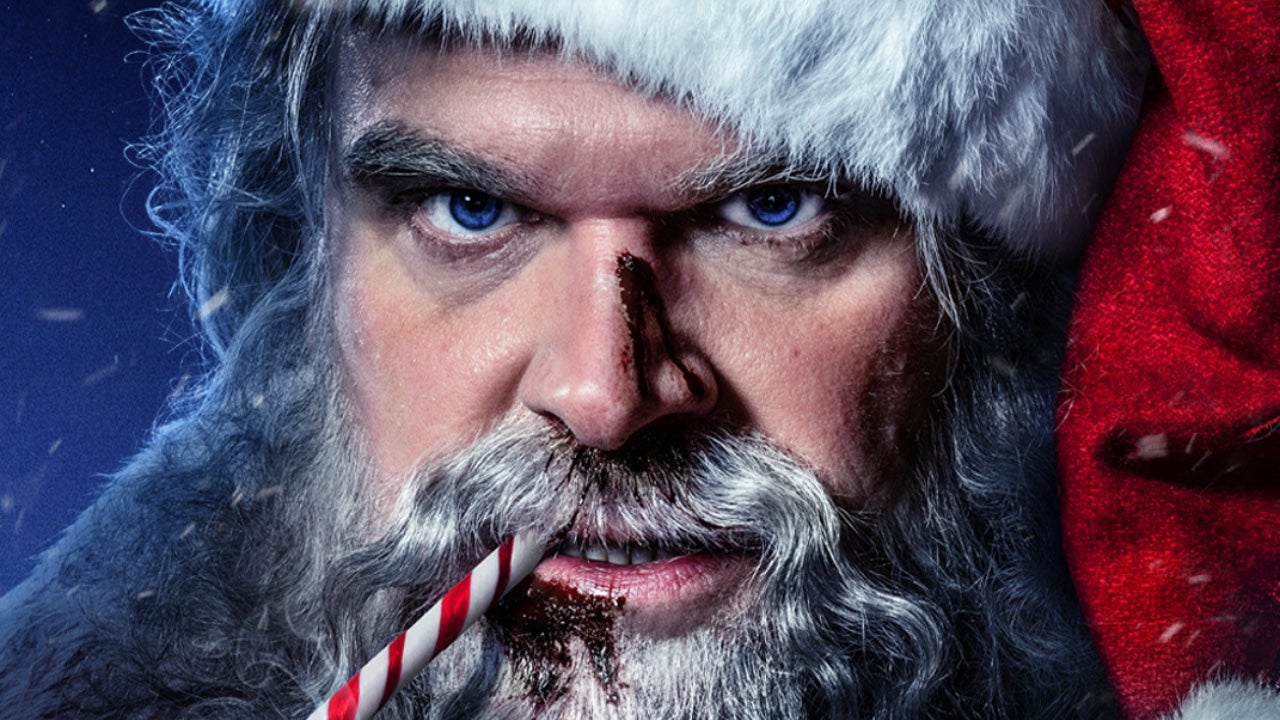 
The lyric “Santa Claus is coming to town” will become more ominous after Violent Night hits theaters this December.

From director Tommy Wirkola (Dead Snow, Hansel & Gretel: Witch Hunters), Violent Night stars David Harbour as the real-deal Santa, caught up in a treacherous hostage/robbery plot while making his rounds on Christmas Eve and ready to dispense harsh, lethal justice to those on his naughty list (aka: the unfortunate mercenaries trying to steal millions).

Wirkola easily acknowledges the Die Hard comparisons here, and there are even moments in the movie meant to echo that classic 1988 action game-changer, but Violent Night isn’t only that. “There’s a relationship in the movie between Santa and a little girl that really is the beating heart of the movie,” he explained. “And so when I went into it, I basically said ‘we can do all this crazy action, we’re gonna have fun, we’re gonna have humor and darkness and all that stuff,’ but I really want the audience when they leave the theater to feel like they’ve seen the Christmas movie. So yeah, it has a really interesting combination of things.”

“Obviously, Die Hard was a big influence,” Wirkola added. “And for me, [John] McTiernan, just as a director, is one of my favorite directors, and we try to pay tribute [to] and honor that movie as much as we can. And then try to make our own thing and based on that. Our own crazy story.”

Finding the right actor to play Santa was paramount here, as this person would need to play a character that was both grounded and fantastical. Stranger Things/Black Widow’s David Harbour was just the right performer to play this Yuletide avenger. “When I talked to David, he had a lot of great ideas, and I knew he could really make this special. And David, obviously is a great actor, has heart and humor.”

“[Harbour] has great physicality,” the director continued, “and he really wanted to train for it and do the action himself, to embrace it. And as we know, like what [Violent Night producers] 87North did with [Bob] Odenkirk and Nobody, or even what David Leitch did with John Wick and Atomic Blonde, he really wanted to do that too. And without spoiling anything, Santa’s backstory kind of plays into how he trained. And he really went all in. Harbour is an actor who gives everything and I really think you’ll see that he did something special.”

From the trailer, you’ll notice Santa dispatches his foes with various St. Nick tricks, but that didn’t come without a bit of brainstorming. As Wirkola described it, “some of that was in the script, but that was actually the thing that really developed during that process. We realized, ‘Okay, we have a Christmas movie with the real Santa Claus. We should really embrace that for all its worth in these set-pieces. So every set-piece in the movie has winter or snow or Christmas elements (that) weaves into it in a big way. And yes, we use the sack. We use the naughty/nice list. He uses Christmas lights, the star on the Christmas tree. Going up the chimney, like there’s a lot of that that comes with sand that we use in actions. And there’s a big scene in the movie. You see just a tiny bit of it in the trailer where he blows up somebody with a grenade. But that’s just a part of a scene where he takes on 25 mercenaries with only stuff that he can find around this barn. It was a really fun scene to shoot.”

A lover of ’80s and ’90s action movies, Wirkola was dead set on bringing in some of those elements to Violent Night. In particular, the reluctant hero aspect where the main character is maybe in a bad place when we first meet them. “[Santa] is a little lost,” he shared. “He kind of has a little bit of faith but he feels like people don’t believe in him anymore. And that Christmas is all about consumers and toys. And when he goes on this journey, and comes across his family and taken over by terrorists, and he meets this little girl, it kind of helps him find that belief again, because she is such a believer in Christmas.”

“And his backstory actually ties into some Norwegian mythology that I really loved,” Wirkola said, explaining that Santa’s past actually informs how he’s able to take on so many bad guys and kick their butt the way he does.

Filling the Hans Gruber role here, the leader of the Christmas Eve thieves, is John Leguizamo, a villain who goes by “Mr. Scrooge” and pulls off jobs on Christmas for very specific reasons. Mr. Scrooge, as his (code)namesake suggests, “has a chip on his shoulder when it comes to Christmas. And the fact that he hates Christmas makes it so he doesn’t realize he’s coming up against a real Santa. But when he starts to realize the truth, it actually brings the story up another level when it comes to what’s at stake. And John, obviously, an amazing actor who I’ve seen growing up in so many different roles, he can do anything. He’s funny, he’s charming, he’s dangerous.”

“We also have Beverly D’Angelo in the movie,” Wirkola beamed. “Like, Christmas Vacation is one of my all-time favorite Christmas movies and getting her involved was great. I think people will be surprised when they see her in this role. It’s really something different for her.”