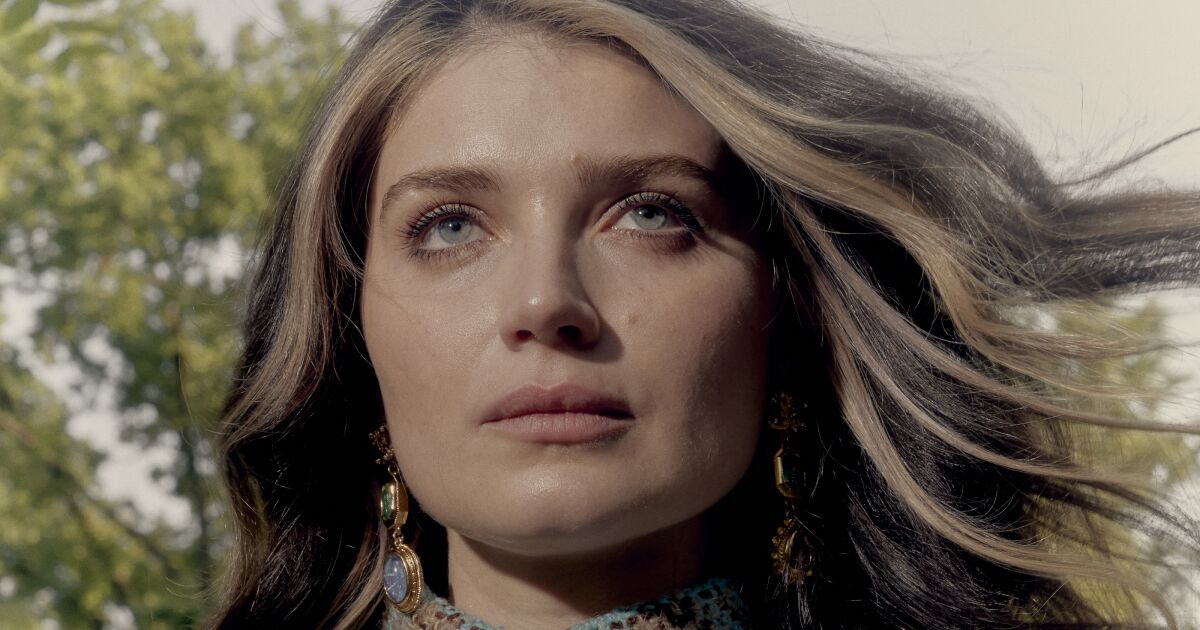 On a warm, sunny afternoon in September, Eve Hewson was in Washington Square Park, retracing the steps of her past.

Raised outside Dublin, Hewson came to New York 12 years ago and enrolled at NYU’s Tisch School of the Arts with the singular goal of making it as an actor. Her parents had only allowed her to apply to one drama school and, though she recalls vomiting from nerves after the audition, she made the cut.

“Now I look back on it and I’m like ‘What the f— was I thinking?’ But when you’re 17, you’re like, ‘This is my one true dream. I’m not gonna have a plan B.’ I had no other skills!” she says, her Irish brogue rising an octave in disbelief. As a pack of NYU freshmen — easily identified thanks to their matching purple T-shirts and name tags — crosses the street en masse, Hewson squeals with recognition: “Fresh meat!”

Hewson’s youthful chutzpah may now strike her as reckless, but it served her well.

The 31-year-old has been working steadily for more than a decade, starring alongside the likes of James Gandolfini (in his penultimate film, “Enough Said”) and Sean Penn (in Paolo Sorrentino’s “This Must Be the Place”) before she’d even completed her studies. Straight out of school, she landed in Steven Soderbergh’s visceral medical drama, “The Knick,” followed by Steven Spielberg’s Cold War saga, “Bridge of Spies.”

After a pair of high-profile leading roles last year — as a posh London housewife in the trippy psychological thriller “Behind Her Eyes” and as a mysterious pioneer in the harrowing period piece “The Luminaries” — Hewson has returned to her Irish roots with “Bad Sisters,” now streaming on Apple TV+.

Created by Sharon Horgan, the darkly comic murder mystery follows a tight-knit clan of Irish sisters who hatch a plot to kill their despicable but annoyingly resilient brother-in-law. Hewson plays Becka, the youngest of the five Garvey sisters, a free-spirited massage therapist whose ill-advised romance with a cute insurance agent (Daryl McCormack) threatens to blow up their entire scheme.

Blending humor and trauma in a way that feels distinctly Irish — even if it’s adapted from a Belgian series — “Bad Sisters” leverages Hewson’s agility as a performer in a way that few projects have to date.

Though she’s frequently been cast as quiet characters in period pieces — something about her limpid blue eyes and dark hair translate well to the past — in person Hewson cuts a decidedly contemporary figure: blond streaks; violet-tinted sunglasses; unbuttoned blouse and a bralette worn with wide-legged trousers; chunky sandals and patterned socks. Hewson is delightfully unguarded (she admits to stalking her ex-boyfriend on Instagram) and has an irreverent sense of humor, evident when she says of Queen Elizabeth II’s death a day earlier: “I would have cried more if Claire Foy died.” (She loves “The Crown,” though.)

Hewson is thrilled to be back in New York, where she lived for much of her 20s, for a few weeks while she has some downtime. She hopes to move back one day and become a “crazy old lady on the stoop — purple hair, loads of cats.”

As we zigzag east, toward a hotel cafe on the Bowery, Hewson recalls her last few years as a vagabond. She had just settled into a new apartment in Williamsburg, Brooklyn, and was worried about getting her visa renewed when COVID arrived in 2020. Her parents, always keen to have their kids at home, summoned her back to Dublin, where she spent the height of the pandemic “going on a lot of long, sad walks and doing therapy.”

Those parents would be Ali Hewson, a fashion entrepreneur, and Paul Hewson, a singer and songwriter better known by his stage name: Bono.

Hewson’s family is unusually tight — “probably very codependent,” she says, settling into a booth at the cafe. During lockdown, the four Hewson siblings would throw mini discos in the studio at the end of their garden. “We do things in a pack.” She still considers Ireland home, and believes it has helped keep her family grounded despite their connection to an industry known for domestic dysfunction. “We’ve always had the balance of coming back to Dublin. It is a very healing thing being around Irish people. You can step away from the madness.”

Growing up with a rock star father has given Hewson rare insight into the perils of global celebrity, particularly the scrutiny that comes with it . “I feel for him because he gets a lot of s—,” she says. “And he deals with it very gracefully. But I know it hurts.” Fame for fame’s sake is “a sad, sad thing to want” in her view. “It’s got to be worse than heroin.”

The reflected spotlight has also affected her sense of self. Every new job or friendship involves “a transition period,” she says, “because people have expectations of you.”

“You have a reputation to uphold that’s not yours. You don’t genuinely have your own identity. People don’t really see you as you, or they expect you to be a d—head, so then you have to be really nice to win them over. It’s a process, and everyone puts their own baggage on you.” Despite this baggage, Hewson comes across as genuinely thoughtful and unaffected, texting before our meeting to make sure I have the right location and, later, readily sharing a plate of burrata. (Truly, is there anything kinder?)

Whether she is especially motivated to build her own reputation as an artist or simply has good taste, Hewson has gravitated to bold projects like “The Knick,” a gripping period piece set in a Manhattan hospital in the early 1900s.

Despite the edginess of the material — and the intimate scenes she had to film with a much older actor, including one in which Lucy suggests dousing Thackery’s penis in cocaine — Hewson says she felt very safe in Soderbergh’s hands: “It was the perfect place for me to stretch my little wings.”

But Hewson suspects that working in such a sensitive, supportive environment so early in her career also set her up for disappointment later on. Or, as she puts it, “I was absolutely spoiled rotten. It took me years to recover. On every other set, it just wasn’t the same.”

After a particularly demoralizing experience on a movie she won’t name — “it’s not hard to look up” — she considered quitting the business entirely.

“There was a lot of focus on what my body looked like and how I wasn’t sexy enough or attractive enough and how we had to make my character more sexually aggressive. I had never experienced anything on that scale of misogyny and disrespect. It was really tough, especially coming from working with brilliant directors like Spielberg and Soderbergh and [Paolo] Sorrentino, who just never spoke to me in that way. That experience broke my confidence.”

Therapy helped her move on. So did making “The Luminaries” for six months on location in New Zealand. In the BBC/Starz series, set in the antipodean frontier in the 1860s and adapted from Eleanor Catton’s sprawling novel, she plays a woman who travels to the country’s wild South Island, where she is trafficked into sex work and endures repeated brutality. “I was in a corset and a crinoline, covered in mud, chained to a [jail] cell, sweating, and I would come home with bruises all over me. It was like, either go hard or go home,” she says, “and I went hard.”

Himesh Patel, who starred with Hewson in “The Luminaries,” admits that before filming began, he fleetingly wondered how he’d get on with someone whose background was so different from his own. (His parents ran a newsagent’s shop in England.) “What I found was someone who couldn’t have been more down to earth, more kind or generous or fun to be around,” he says, praising the “wonderful stillness” of her performance — “something so different, and so much more enigmatic” than what you typically see in a starchy costume drama. “I immediately could tell how seriously she took her work,” he adds.

Hewson followed “The Luminaries” with “Behind Her Eyes,” a sexually charged thriller with a twist ending so mind-bendingly out-there it inspired a cottage industry of explainers. Hewson had “a riot of a time” making the series because, she says, a devilish glint in her eye, “It’s more fun to play a lie.”

When Hewson read the script for “Bad Sisters,” it was “a lightning-bolt situation, like I found the thing I always knew I could do.” At the time, Hewson was also mulling a high-profile project “my agents would have loved me to do,” she says. So Horgan wrote her a letter, telling her all the reasons she had to play Becka. Hewson didn’t need much convincing: “I just knew if anybody else ever played her, I would be devastated.”

“I think she’s an absolute revelation,” says Horgan, who plays eldest sister Eva in the series and, like Patel, praises Hewson’s discipline. “[She’s] great craic when we’re having fun, but when she’s focused, she’s very focused.”

The role enabled her to explore a full spectrum of emotions, playing moments of meet-cute screwball romance alongside gut-wrenching tragedy. (In Friday’s episode, Becka learns that her latest scheme to kill her brother-in-law went horribly awry.)

“Becka was the most me I’ve ever put out there,” Hewson says. While this is true in a literal sense — scenes of Becka and her sisters swimming in the Irish Sea were filmed minutes down the road from Hewson’s family home — she also related to the messy humanity of the Garvey clan.

“There is something different about characters that are written by women,” she says. “In this [show] there’s middle-aged women, infertile women, angry one-eyed lesbians. All of the things that Hollywood says are not interesting, and yet I think are the most sexy, the most thrilling, the most exciting group of women that I’ve seen in a while.”

It was exhilarating, if also exhausting, “to live in between comedy and drama,” says Hewson. “The girls” — she means her co-stars — “called it ‘straddling’: one foot’s in drama, and you’re just riding it.”

Up next is “Flora and Her Son,” from “Once” filmmaker John Carney. It’s a musical — “the one thing I thought I would never do, because I can’t sing,” says Hewson, whose love of a challenge outweighs her self-doubt. “You just s— your pants before every job. You go, ‘I have no creative bone in my body, I’ve no original thought. Why did they cast me?’ The fear is immense. But the high after achieving it is worth it.”

Hewson thinks she might like to direct someday, but a more immediate priority is finding work that will bring her back to New York and closer to achieving her cat-lady dreams. She leans into the recorder and pleads: “Someone offer me an American job.”
Somewhere in the city, there’s a stoop with her name on it.