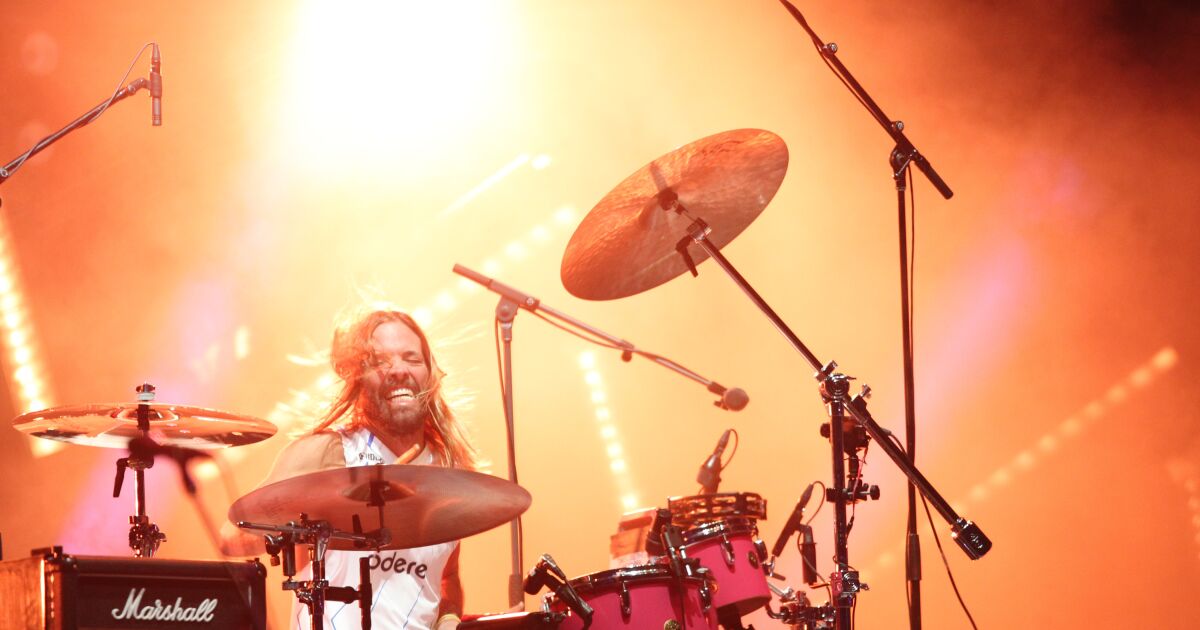 “Dave Grohl is the heart of Foo Fighters, but Taylor Hawkins was its rock star,” read the headline in The Times following Hawkins’ death on March 25 at age 50. Six months later, those sentiments ring truer than ever.

Tonight at the Kia Forum, the Foo Fighters and Hawkins’ family will present the second all-star tribute concert to the late drummer, some fifty miles from Laguna Beach, where Hawkins first started pounding on a kit and dreaming of rock stardom. On Sept. 3 at London’s Wembley Stadium, rockers including Liam Gallagher, Josh Homme, Wolfgang Van Halen, Travis Barker and Paul McCartney all paid their musical respects; Hawkins’ son Shane, a powerhouse drummer like his dad, joined the Foos on “My Hero” and brought the crowd, live and watching via stream around the world, to tears.

6:43 p.m. Greetings from the Kia Forum, where thousands of Foo Fighters fans are pouring into the arena ahead of what promises to be a long, emotional night. Outside the building, people are writing messages for Hawkins on sticky notes and attaching them to a large mural. Among the tributes: “Fly on, Hawk” and “F— yeah! You have inspired a generation.”

Adriana Cuellar, a fan from Los Angeles, said she’s been a fan of Hawkins’ since she was 14. “And I’m 41 now — do the math.” News of Hawkins’ death was a shock, she said. But tonight she’s looking forward to seeing “Foo Fighters getting back onstage, still performing as a band — carrying on without Taylor but keeping his memory alive.”

7 p.m. Foo Fighters have history at the Forum. I remember seeing the band here in 2015, not long after Dave Grohl had broken his leg and was playing shows while seated in a “Game of Thrones”-style chair. That night Hawkins said he’d been here to see Boston in 1986, while Grohl told the crowd that guitarist Pat Smear’s first concert had been at the Forum: a Rolling Stones gig in 1972 that featured Stevie Wonder as an opening act.

7:06 p.m. The lights have gone down, and Grohl’s 16-year-old daughter Violet has taken the stage for a rendition of Leonard Cohen’s “Hallelujah” (by way of Jeff Buckley), accompanied only by an electric guitarist. A lovely welcome to an evening of mourning and gratitude.

7:13 p.m. Foo Fighters are onstage. “Welcome to the Los Angeles Taylor Hawkins tribute concert,” Dave Grohl announces. “This is the hometown s—, so you gotta make it loud.” Grohl says the idea of tonight’s show is to “spend some time in [Hawkins’] musical mind, which could be a pretty terrifying place” and to “celebrate this person that has touched our lives.”

7:20 p.m. Foo Fighters and the Forum warned folks that tonight’s show would begin on time, and the message clearly got through: In nearly two decades of L.A. concert-going, I have never seen this place this crowded before 8 p.m.

7:31 p.m. Jon Davison, who sings lead in the current version of the veteran prog-rock band Yes, has joined Chevy Metal and is hitting all the high notes in “Owner of a Lonely Heart.”

7:38 p.m. For Chevy Metal’s final tune — and I should say that they’ve been joined throughout their set by Foo Fighters producer Greg Kurstin on keys — Kesha

is singing David Bowie’s “Heroes” while wearing a sparkly silver cape. A big swing, and she’s connecting — wardrobe malfunction and all. “Not to make light of this situation,” she says, “but Taylor would have loved that my t—s just fell out.”

7:46 p.m. Hawkins’ other other band, the Coattail Riders, are playing some originals — including, uh, “Range Rover Bitch” — with lead vocals from not-a-brother Justin Hawkins of British glam-rock act the Darkness.

7:56 p.m. Justin Hawkins introduces “one of Taylor’s favorite musicians — a bass behemoth, the man with thumbs of glory”: Mark King from Level 42, who ‘s slapping the ever-living heck out of the British funk-pop act’s “Something About You” with the Coattail Riders.

8:04 p.m. Justin Hawkins has brought out Darkness drummer Rufus Taylor for the band’s 2003 classic “I Believe in a Thing Called Love” — a pop-metal banger that sounds like it was written to satisfy an assignment from Dave Grohl.

8:28 p.m. Grinning like a kid who’s opened his Christmas presents early, Grohl is sitting in on drums with Walsh and the James Gang for the riff-tastic ‘70s jam “Funk #49.”

8:31 p.m. Walsh, speaking in his signature genius-caveman cadence, recounts a time when Taylor Hawkins asked him if all the wild stories about him on the road were true.

8:38 p.m. “Taylor was friends with every f— musician on earth,” Grohl says as he brings Mark Ronson to the stage. And as if to prove it, Ronson — the producer and “Uptown Funk” hitmaker — does a very smooth rendition of Gerry Rafferty’s ”Right Down the Line” with a band featuring Grohl, Roger Manning of Jellyfish and Andrew Wyatt of Miike Snow.

8:47 p.m. “We’re Them Crooked Vultures,” says Josh Homme, flanked by Grohl, Alain Johannes and Led Zeppelin’s John Paul Jones. “This is a song by Elton John. I don’t know why we’re playing it, but we’re about to.” Then the long-mothballed power-grunge outfit slides into “Goodbye Yellow Brick Road.”

8:53 p.m. “Knowing Taylor for twenty-plus years, he’d have f— loved this,” Homme says before leading Them Crooked Vultures through “Long Slow Goodbye,” a song by his main band, Queens of the Stone Age.

9:04 p.m. A rare turn on bass by Grohl as he leads a band with the Darkness’ Justin Hawkins, drummer Josh Freese and guitarist Wolfgang Van Halen — son of the late Eddie Van Halen — through a feverish take on the pop-metal classic “Panama.”

9:08 p.m. The Van Halen worship continues with a faithfully sleazy version of “Hot for Teacher,” Justin Hawkins flouncing across the stage in a hot-pink bodysuit a la Sunset Strip-era Diamond Dave.

9:18 p.m. Foos guitarist Pat Smear says he came to the Forum in 1983 to see “this band” — which turns out to be Def Leppard. Now the British pop-metal veterans are cranking “Rock of Ages” with help from several Foos, including Grohl and Smear on guitar.

9:27 p.m. Dave Grohl: “You can’t really play a gig in Los Angeles without having these guys come jam with you.”

9:43 p.m. Elliot Easton of the Cars is now jamming with the Foo Fighters and Josh Homme on the new wave classic “Shake It Up.” The Gen X-ers in the house are pumped. The Gen Z-ers are confused.

“Just What I Needed” is sounding very, very good to this Gen X-er. Shout out to Foo Fighters’ female backing vocalists, aided here by Violet Grohl.

9:49 p.m. A spontaneous “Taylor Hawkins” chant goes up in the crowd.

9:55 p.m. “It’s like a revolving door of rock heroes tonight,” Grohl says as he brings out Pink, Nancy Wilson of Heart and drummer Jon Theodore (currently of Queens of the Stone Age and formerly of the Mars Volta) for a thundering version of Heart’s “Barracuda.”

10:07 p.m. Grohl tells the crowd about his first meeting with Hawkins — they first encountered each other backstage at a KROQ-FM Almost Acoustic Christmas — before introducing drummer Stewart Copeland, who joins Foo Fighters for a punky blitz through the Police’s “Next to You.”

10:16 p.m. Hardcore Hawkins fans know that the drummer played for Alanis Morissette before Grohl tapped him for Foo Fighters, and now Morissette is singing her deathless “You Oughta Know” with the Foos and guest drummer Chad Smith of Red Hot Chili Peppers, who’s wearing a backwards baseball cap (obviously) and a black Bad Company T-shirt.

10:20 p.m. The musicians perhaps most responsible for shaping Hawkins’ life — Grohl and Morissette — share a deep, long hug before Morissette leaves the stage.

10:25 p.m. “I have to say — this show compared to the London show, this f— s— rocks a little harder,” Grohl tells the crowd before a true hard-rock supergroup comes to the stage.

10:51 p.m. Rush — minus its own drummer, Neil Peart, who died in 2020 — plays “Working Man” with Chad Smith and “YYZ” with Danny Carey of Tool. We have officially entered the lengthy-instrumental-jam portion of the show.